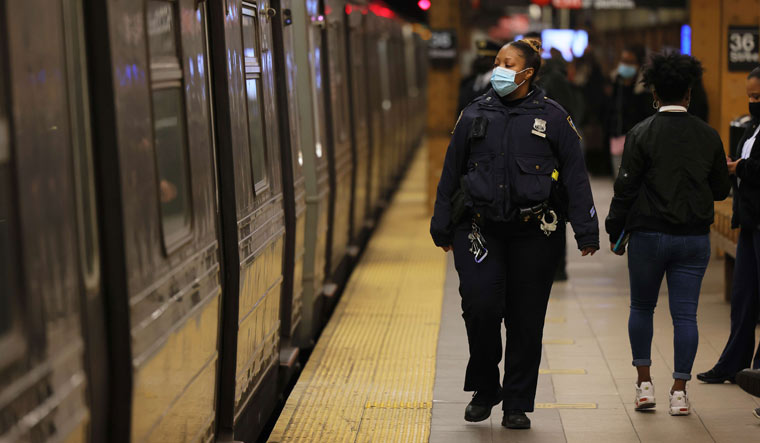 An NYPD officer patrols the subway platform in Brooklyn | AFP

At a time the US is fiercely debating the issue of gun violence, the Supreme Court on Thursday struck down a New York law restricting gun-carrying rights. The court declared for the first time that the US Constitution protects an individual's right to carry a handgun in public for self-defense, handing a landmark victory to gun rights advocates.

The decision that comes in the shadow of the two recent mass shootings in Uvalde and Buffalo has come as a shocker for many. Condemning the decision, President Joe Biden said: "This ruling contradicts both common sense and the Constitution, and should deeply trouble us all." New York Governor Kathy Hochul, a Democrat, called the ruling "absolutely shocking." New York City Mayor Eric Adams said he would review other ways to restrict gun access, such as by tightening the application process for buying firearms. "We cannot allow New York to become the wild, wild west," he said.

Hochul said her office would work to pass new measures including defining "sensitive places" where guns would be barred.

The National Rifle Association (NRA) welcomed the decision, Reuters reported. "This is a monumental win for NRA members and for gun owners across the country," said Jason Ouimet, executive director of the National Rifle Association Institute for Legislative Action, in a statement."This ruling opens the door to rightly change the law in the seven remaining states that still don't recognise the right tocarry a firearm for personal protection."

Meanwhile, the US Senate advanced a bipartisan package of gin safety measures on Thursday.The Senate bill, which supporters say would save lives, aims to tighten background checks for would-be gun purchasers convicted of domestic violence or significant crimes as juveniles. But it does not include more sweeping gun control measure favored by Democrats including Biden. The vote was 65 to 33, with all 50 Democratic-voting members and 15 Republicans voting to send the bill to the House. The vote is expected Friday.

In a statement, President Biden said Uvalde residents told him when he visited that Washington had to act. "Our kids in schools and our communities will be safer because of this legislation. I call on Congress to finish the job and get this bill to my desk,"Biden said.