Imran warns Pakistan could break up. Zardari says ex-PM is talking like Modi

Imran says country is going towards a default 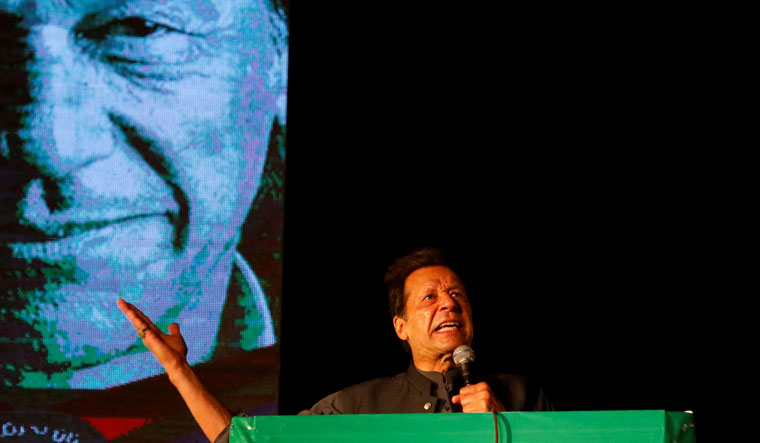 Former Pakistan prime minister Imran Khan on Wednesday warned of grave consequences for Pakistan if his demand for early elections was not met.

Imran spoke about the issue and his uneasy relationship with the 'establishment' (a euphemism for the Pakistan Army) in an interview with local news outlet Bol News.

Imran told Bol News, “We will see if they [establishment] allow us to go towards elections through legal and constitutional means; otherwise, this country will go towards [a] civil war,” Dawn reported.

Imran said “If the establishment doesn't make the right decisions, then I can assure in writing that [before everyone else] they and the army will be destroyed because what will become of the country if it goes bankrupt,” Dawn reported.

Imran claimed the country was going towards a default and even warned the world community could attempt to force Islamabad to give up its nuclear arsenal.

Imran said the loss of the nuclear deterrent would result in Pakistan breaking up into “three pieces”. He was quoted by Dawn as saying “If the right decisions aren't made at this time, then the country is going towards suicide.”

Imran alleged the current coalition government, headed by Shehbaz Sharif, aimed to please the US “in all ways”. He claimed PML-N chief Nawaz Sharif and PPP co-chairman Asif Ali Zardari had always worked to make the “nexus” of the US, India and Israel “happy”, Geo News reported.

“Their (government's) plan is not to strengthen Pakistan [...] when I was ousted, there were celebrations in India like Shehbaz Sharif was an Indian [who came into power],” Imran was quoted as saying by Geo News.

Asif Ali Zardari, a former president of Pakistan, was quoted by Geo News as saying “This language is not of a Pakistani, but of [Indian Prime Minister Narendra] Modi as no Pakistani could talk of tearing Pakistan into pieces... The desire to tear Pakistan into pieces cannot be fulfilled until we and our descendants are alive, Pakistan will exist till the day of judgement.”

Zardari implored Imran to “be brave and do politics by standing on your own feet”, reminding him power was not everything.

PML-N leader Talal Chaudhry condemned Imran's comments, saying “only a mentally ill person could talk in such a way”, Geo News reported. “In the past, Imran Khan said it is better to drop a nuclear bomb on Pakistan, he also asked people to start a civil disobedience movement...” Talal Chaudhry said.

Pakistan Democratic Movement (PDM) spokesperson Hafiz Hamdullah claimed Imran's party, the PTI, “itself will tear into pieces but Pakistan will exist always... In the lust for power, Imran Khan is talking about Pakistan tearing into parts. His statement proved that he is an agent of Pakistan’s enemy.”