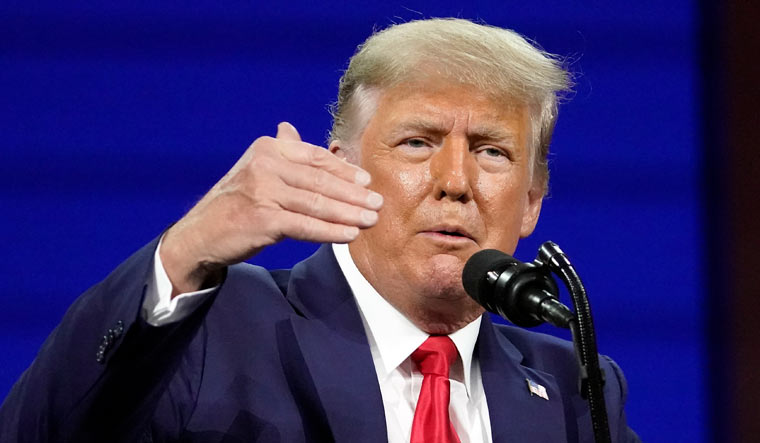 Former US president Donald Trump called for ending gun-free school zones after a gunman killed 19 children and two teachers this week at a Texas school. He also said that the country should make it easier to confine "deranged" people.

"As the age-old saying goes, the only way to stop a bad guy with a gun is a good guy with a gun," Trump said at a convention in Houston of the National Rifle Association, a gun rights advocacy group. He said gun-free school zones must be eliminated, adding that such zones leave victims with no means to defend themselves in case of an attack by an armed person. "The existence of evil is one of the very best reasons to arm law-abiding citizens."

The fatal shooting at the Robb Elementary School in Uvalde by an 18-year-old gunman equipped with an AR-15 style semiautomatic rifle has, again, brought the focus on the NRA, a major donor to Congress members, mostly Republicans.

"Clearly, we need to make it far easier to confine the violent and mentally deranged into mental institutions," Trump said.

The former US president also said every school should have a single point of entry, strong fencing and metal detectors, adding there should also be a police official or an armed guard at all times in every school. "This is not a matter of money. This is a matter of will. If the United States has $40 billion to send to Ukraine, we can do this," he said, referring to US's financial and military support for Ukraine after Russia's invasion.

In 2012, Adam Lanza, a 20-year-old gunman, had forced his way into a Connecticut elementary school and massacred 26 people, mostly children, with an AR-15-style rifle. Longtime gun-rights supporters from both parties in Congress said they were willing to consider new legislation. But, one week later, NRA CEO Wayne LaPierre, in a defiant speech, said what Trump said a decade later today. “The only thing that stops a bad guy with a gun is a good guy with a gun," he said, blaming video games, cowardly lawmakers, the media and a perverted society for the carnage, while calling for armed guards at schools across the US.

This time, however, LaPierre didn't need to address the bloodshed - the organisation's Republican allies in Congress did.

“The problem starts with people. Not with guns,” Alabama Sen. Tommy Tuberville, who holds an A-rating and an endorsement from the NRA, told reporters on Wednesday, bluntly summing up the position of many in the GOP, especially considering the party's recent turn further right.

"I'm very sorry it happened. But guns are not the problem, OK. People are the problem. That's where it starts. And we've had guns forever, and we're gonna continue to have guns.”

Much has changed since Sandy Hook. The NRA is on the ropes after a series of costly financial scandals and lawsuits. And an ascendant gun control movement has poured tens of millions of dollars into political campaigns to counter their message.

But even as mass shootings continue unabated, in Washington one thing remains the same: Republicans and Democrats both agree there is little chance that legislation tightening gun laws will be passed by a narrowly divided Congress.

The gridlock, which remains even as public opinion supports some tighter gun laws, offers testament to the enduring influence of gun rights groups, which have spent USD 171 million lobbying the federal government since 1989.

The gun rights movement also continues to have success at the state level, where it has focused on repealing laws requiring a permit to carry a concealed handgun.

Roughly half the states in the US have rolled back such laws, with Texas, Indiana and Tennessee all doing so in the past year.

The Supreme Court, meanwhile, is expected to soon issue its biggest gun ruling in more than a decade, one expected to make it easier to carry guns in public in some of the nation's largest cities.