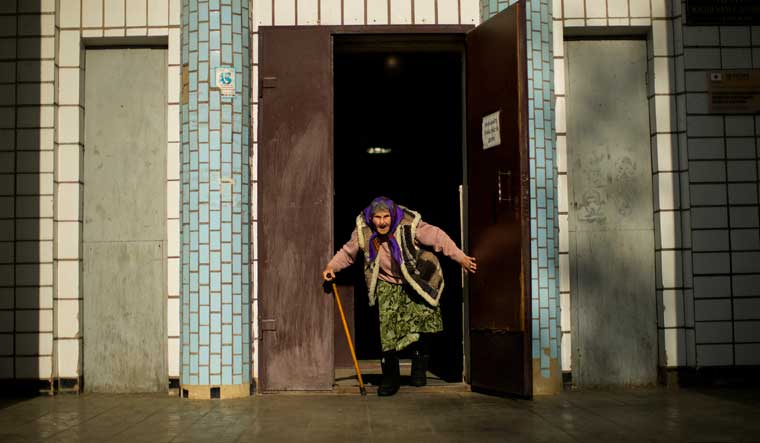 A woman, fleeing from an area near the front line in Donetsk, prepares to board a bus in Kurakhove, eastern Ukraine | AP

As the Russian invasion of Ukraine approaches its 100th day, Moscow's war objectives and strategies have undergone a sea change following multiple setbacks in the first two months. Russian forces were forced to retreat from the outskirts of Kyiv, their march to Odessa got stuck at Mykolaiv, and a few days ago, they were pushed out of Kharkiv, Ukraine's second largest city. Such devastating losses have forced the Russian commanders to rectify their tactical and operational inadequacies and reorient their strategic priorities.

From the primary objective of ousting “Nazi elements” from the governing circles of Ukraine and bringing the country back into the Russian orbit, Russian war aims have now been downscaled drastically to taking control of the entire Donbas region in the east, comprising Donetsk and Luhansk republics, which have a significant Russian population. Russia is also eyeing to consolidate its hold on territories it acquired in southern Ukraine. Significant Russian populations in Zaporozhye, Kherson and Mykolaiv have been demanding to merge their territories with the Southern Federal District of Russia, which also includes Crimea.

In the Donbas, the Russian military planners have abandoned their earlier strategy of encircling the entire region, focusing instead on smaller encirclements of key cities and town, allowing Russian soldiers to make slow, incremental gains against some of the best-fortified and most-defended areas of Ukraine. In effect, the war which had engulfed entire Ukraine, including its capital Kyiv, when it was launched on February 24, has now been limited to the heart of eastern Donbas. Russia is trying to replicate the siege strategy it employed in the southeastern city of Mariupol using concentrated firepower and streamlined supply lines, allowing its forces to notch up a rare victory in the campaign.

Ukraine's defence ministry spokesperson Oleksandr Motuzyanyk said the battles being fought in eastern Ukraine could determine the country's fate. By May 25, Russian forces took over three key Donetsk towns including Svitlodarsk. A Russian flag now flies over the mayor's office and Russian soldiers are conducting door-to-door checking to arrest partisans and those who aid them.

In Luhansk, fierce battles are taking place around Severodonetsk, the eastern most city still under Ukrainian control, also the largest city under Ukrainian control in the province. Severodonetsk is under constant artillery barrage from all directions and water and electricity supplies are cut. Russia is said to have deployed its BMP-T Terminator support tanks to protect its main battle tanks in an all out effort to take the city. Serhiy Haidai, Ukraine's military governor of Luhansk, said Russia was adopting a “scorched earth policy to wipe Severodonetsk off the face of the earth”. Taking the city that sits on a strategic spot on the Donets river will give Russia huge tactical advantage. It will also put a key detachment of Ukrainian forces at risk. Ukraine has committed more than 15,000 soldiers to defend the city. Next in line would be the cities like Kramatorsk and Lysychansk which also have populations above one lakh, like Severodonetsk.

On Saturday, Russia said it has captured the eastern Ukraine town of Lyman. With the fall of Lyman, the neighbouring city of Sloviansk will come under Russian artillery attack, encircling Ukrainian troops assembled in the southeast of Lyman.

The coming days are likely to see a bitter battle of attrition and the results will be determined by the quality of the smaller fighting units. If Severodonetsk falls, it will be Russia's second major successful military encirclement this month after Mariupol, and will allow Russia to exert control over the entire Luhansk province. The Russian strategy seems to be either pushing the Ukrainian fighters further west or encircling and neutralising them with heavy bombardment.

The Ukrainian fighters, however, are not yet ready to retreat. Like they did in Mariupol, they are offering fierce resistance, despite not having heavy weapons to counter-attack effectively. The resistance, however, allows Ukrainian troops in other parts of the country to regroup and also to replenish their ammunition, especially with advanced artillery supplied by the west, like the M-777 long-range howitzers.

Ukraine is receiving extensive support from the west in terms of weapon systems as well as money. The major challenge before Ukrainian President Volodymyr Zelensky is to make sure that his military high command is able to get their forces trained to make use of the new systems and also to transport the systems to the Donbas region before it is overrun by Russian forces.

Similar challenges plague Russia as well. The growing opposition to the war, the massive loss of men and material and the economic crisis caused by the biting sanctions are putting pressure on President Vladimir Putin and his administration. On May 25, Putin visited wounded soldiers at a military hospital in Moscow, the first such instance after the invasion. Payments to soldiers fighting in Ukraine have been increased and child care allowance for female soldiers have been doubled. Pensions for non-working seniors have been hiked by 10 per cent.

Putin has also issued a decree simplifying the procedure for Ukrainians living in Russian-controlled regions of Ukraine, especially in the southern cities of Zaporizhzhia and Kherson to get Russian citizenship. The same procedure already exists for residents in Donetsk and Luhansk. There are also reports that Russia is moving hundreds of thousands of Ukrainians in the areas it control to Russia, depopulating vast tracts of Ukrainian territory.

After three months of intense conflict, however, there is no clarity about how the war would end. Speaking at the Davos World Economic Forum on May 23, former US secretary of state Henry Kissinger asked Ukraine to get real and said the Ukrainian leadership should be forced to give up some territory to the Russians in order to reach a peace deal. It drew an angry reaction from Zelensky. “I get the sense that instead of 2022, Kissinger has 1938 on his calendar,” he said, referring to the year Hitler began his march across Europe, forcing many, including the Kissinger family, to escape to the US. “Nobody heard from him then that it was necessary to adapt to the Nazis instead of fleeing them or fighting them,” he said. Zelensky seems to be emboldened by the amount of support he is receiving from the west, the inept performance of the Russian army and the global public opinion in favour of Ukraine. During the early days of the conflict, Zelensky seemed willing to make some compromises in exchange of peace. Putin, who was then eyeing an easy victory, ignored those overtures. Zelensky's attitude towards a compromise has hardened since then.

Yet, Russia is unlikely to give up the gains it has already made. Prolonging the war would only result in further devastation of Ukraine. It will also cause severe damage to the world economy, already struggling from the after-effects of the pandemic and surging inflation. Western unity will face a stern scrutiny if the war continues without end. While the United States would like to deliver a body blow to Putin and would be willing to support Ukrainian war efforts— especially since the actual fighting is done by the Ukrainians—key European powers would want to put this behind at the earliest and bring back stability to the continent at the earliest. Questions of food and energy security, in which Russia has a major say, continue to be a major concern for Europe and the rest of the world. David Malpass, the head of the World Bank, warned on May 25 that the war could drive the world to a recession as the price of food, energy and fertiliser continue to rise alarmingly. A negotiated settlement which takes into account Kyiv's critical concerns as much as possible would be the best course of action not just for Ukraine and Russia, but for the whole world.