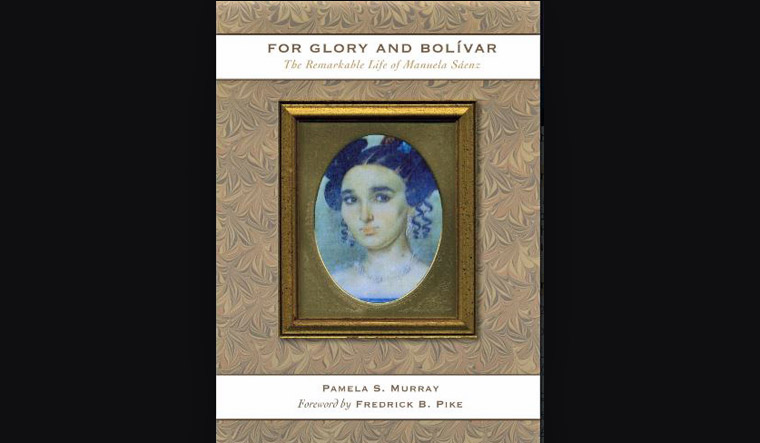 Simon Bolivar is celebrated as the Liberator (Libertador) of South America. He was an exceptional military leader, strategist, visionary, scholar, adventurer and above all a typical Latino macho. After the early death of his wife, he remained a bachelor for the rest of his life. He had affairs with many women. When he met Manuela Saenz (Manuelita), a married Ecuadorian woman, he thought she was yet another score. But he underestimated her. Manuelita fell in love with him, left her husband and became Bolivar’s lover, mistress and confidante for the rest of her life. She adored him, looked after him and was fiercely loyal to him. She fought covertly and overtly against Bolivar’s adversaries in Colombia, Peru and Ecuador during her stay in those places after 1822. She subscribed to Bolivar’s ideals of Latin American independence and political vision. Manuelita and Bolivar had exchanged many letters when they were away from each other.

Manuelita got herself an official position as a member of Bolivar's staff and had assumed the formal role of his personal archivist. She was part of Bolivar’s inner circle-a group that included both civilians and officers. She kept an eye on friends and adversaries of Bolivar and kept him informed of their activities. She showed remarkable courage and ingenuity and saved the life of Bolivar on September 25, 1828, when assassins broke into the presidential palace in Bogota to kill the Liberator. Bolivar was fascinated by the unconventional, courageous, intellectual and playful personality of Manuelita. He called her sometimes an “amiable mad woman”. He benefited from her advice and was inspired by her sweet charm, sharp wit and adventurous rebelliousness. It is for these reasons that Manuelita is called the “La Libertadora del Libertador” (female Liberator of the Liberator).

In the book “For Glory and Bolivar: The Remarkable Life of Manuela Saenz,” the author Pamela S. Murray brings out the political and historical importance of Manuelita and portrays her as a Latin American feminist icon. Murray has done extensive academic research and has cited evidence from historical archives.

Manuelita was an illegitimate daughter of an Ecuadorian businessman and had suffered the stigma and its consequences early in her life. After the death of her mother, she was sent to live at the convent of Santa Catalina. She remained there until age 17 when she was married to James Thorne, a wealthy British merchant. Thorne took her to Lima, where she first came into contact with the movement for independence in which she started taking an active part. That involvement almost certainly grated against her husband’s interests tied to the members of the city's social and business establishment. It also clashed sharply with the sentiments of her royalist father and older half-siblings. She returned to her birthplace, Quito, in June 1822 where she met Bolívar at a party celebrating his latest military triumph. She fell in love with him and stayed as his lover thereafter.

Manuelita rose to be a strong-willed and independent woman and had carved a place for herself in a man's world. She defied the conventions and traditions of the macho society of her era when women were prohibited from participating in government and the public sphere.

Manuelita preferred the world of army camps and barracks and used to appear in public dressed in a military uniform. She rode horses and was accompanied by one or two of her black female servants who were also in military uniform. She smoked and drank like a soldier and was fond of telling dirty jokes.

After Bolivar died in 1830, the Colombian government harassed her. The government attorney accused her of "insulting the public" and "menacing" them with firearms as well as of "acting brusquely, in a way alien to her sex." Manuelita also was deemed guilty of "dressing like a man" and of breaking "the rules of modesty and morality. She was expelled from Colombia. She went back to her native Ecuador but the Ecuadorian government also expelled her saying that she could cause a public disturbance with her Bolivar loyalty. She then went and settled in Paita, a small port town in northwest Peru, where she died in 1856.

Manuelita’s reputation as a feminist icon continues even now. Nela Martinez, an Ecuadorian author, activist and communist party member organized an event, “Primer Encuentro con la Historia: Manuela Saenz” in 1989 bringing together some forty women from Ecuador, Peru, and Cuba. They met in Paita to honour Saenz's memory and visit her tomb. Martinez declared that Manuelita's contributions to independence were on par with those of Bolivar and that she was a "co-participant" in his continental project. She and other participants later signed a document known as the Declaration of Paita promising to take up Manuelita's banner for women’s emancipation.

During a protest against Ecuador's neo-liberal policies, held on March 8, 1998 (International Women's Day), in Quito, the female protestors rode on horseback to the Plaza de Independencia, dressed like the Libertadora.

On May 25, 2007, the anniversary of the Battle of Pichincha, the Ecuadorian government symbolically promoted Manuela Saenz to the rank of an army general.

The famous Chilean poet Pablo Neruda wrote a poem celebrating the Libertadora as a progressive symbol and an icon of revolution and independence. He called her "the siren of rifles, the widow of nets, the tiny creole merchant of honey, doves, pineapples, and pistols who slept among the casks, familiar with the insurgent gun powder”.

In his well-known historical novel, El general en su laberinto (The General in His Labyrinth), Gabriel Garcia Marquez imagines Manuelita almost in the mould of a modern guerrilla. He describes her as "the bold Quitena who smoked a sailor's pipe, used the verbena water favoured by the military as her perfume, dressed in men's clothing, and spent time with soldiers, and whose husky voice still suited the penumbra of love.”

There is a delightful 2001 Venezuelan film “Manuela Saenz, la libertadora del libertador”, which I recommend to the readers of this book.