Syria has witnessed extensive urban combat in the past decade 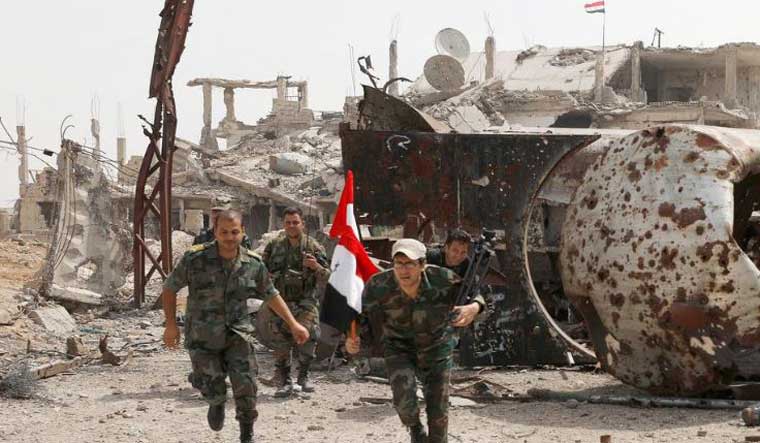 Syrian soldiers in Damascus in 2018 | Reuters

Ever since Russia began its invasion of Ukraine, experts and intelligence officials have been warning that the conquest of cities would involve “ugly scenes of urban warfare”.

Urban warfare typically involves soldiers and vehicles moving amid rubble and damaged buildings to eliminate or capture enemy combatants while holding territory. Superior fire power is rarely an asset in urban combat, given the fact that the war zone has already faced extensive damage and due to risk of collateral damage to friendly forces. On the other hand, urban combat places a premium on agile intelligence collection and dissemination, which increases risk of harassment and torture of civilians.

Even before the conflict started, there were reports Russia intended to deploy soldiers from Chechnya, who had experience of the prolonged urban warfare in that republic at the turn of the century.

On Sunday, The Wall Street Journal reported Russia is planning deployment to Ukraine of personnel from another country that has witnessed extensive urban combat in the past decade: Syria.

“An American assessment indicates that Russia, which has been operating inside Syria since 2015, has in recent days been recruiting fighters from there, hoping their expertise in urban combat can help take Kyiv and deal a devastating blow to the Ukraine government,” The Wall Street Journal reported. The report quoted one official as saying “some” of the Syrian fighters were already in Russia preparing to enter the Ukraine conflict.

Deir Ezzor 24, a Syrian media outlet, reported last week Russia was offering volunteers in Syria between “$200 and $300” to operate as guards in Ukraine for up to six months.

Jennifer Cafarella, national security fellow at the Institute for the Study of War in Washington D.C., told The Wall Street Journal the conflict in Ukraine could become a “new center of gravity for foreign fighters”.

Ukraine's government had claimed last week that 16,000 foreign nationals had volunteered to fight for the country.

“The Russia deployment of foreign fighters from Syria into Ukraine internationalizes the Ukraine war, and therefore could link the war in Ukraine to broader cross regional dynamics, particularly in the Middle East,” warned Cafarella.

“Syrian fighters have spent nearly a decade fighting urban warfare, while Russia’s largely conscripted force lacks this skill set. Ms. Cafarella said Syrian forces deployed to Ukraine could also be asked to work a support role, based on how they worked in Syria with the Wagner Group....,” The Wall Street Journal reported.

However, Charles Lister, a Syria expert at the Middle East Institute in Washington, D.C., was sceptical about the utility of deploying Syrians to Ukraine. “Bringing Syrians into Ukraine is like bringing Martians to fight on the moon... They don’t speak the language, the environment is totally different,” Lister told The Wall Street Journal.