Explained: What is DNA theft, why did Macron refuse a Russian Covid test

Photos of Macron and Putin from Kremlin meet were trending 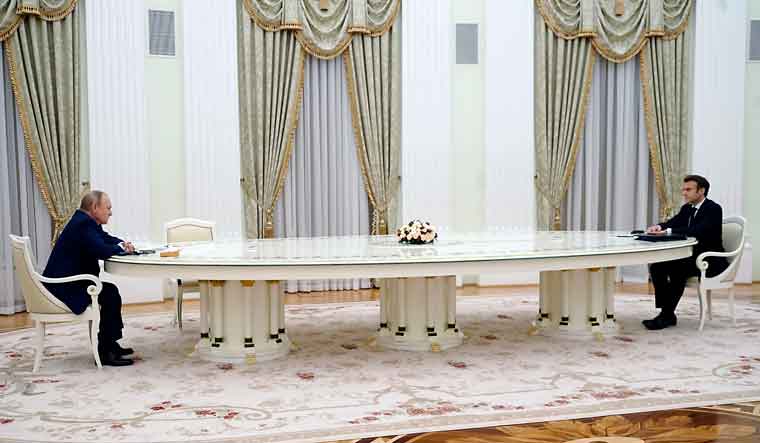 Russian President Vladimir Putin, left, listens to French President Emmanuel Macron during their meeting in the Kremlin in Moscow | AP

Earlier this week, photos of French President Emmanuel Macron and Russian President Vladimir Putin sitting at opposite ends of a very long table, had gone viral. The reason was later revealed—Macron had refused to take a Russian Covid-19 test to 'prevent his DNA from getting into the hands of the Russians'.

And so, in order to enable social distancing, Macron was made to sit at the other end of that table during the talks in Kremlin over the Ukraine crisis. "We knew very well that meant no handshake and that long table. But we could not accept that they get their hands on the president's DNA," Reuters quoted a source, referring to security concerns if the French leader was tested by Russian doctors. Kremlin spokesman Dmitry Peskov said that Macron declining the test meant that he had to keep 6-metre (20 feet) distance from Putin.

The image that trended on social media also became a fodder for jokes and memes. This has also once again triggered discussions about 'DNA theft' and its implications.

Here's a quick look at the issues involved with non-consensual collection and analysis of another person's DNA.

Analysis of an individual's DNA can be used to track his/her heritage, relatives. It poses risk especially in the case of celebrities, world leaders, heads of defence forces or high-risk missions and so on. In 2002, for instance, there were reports in the UK of an alleged plot to seize Prince Harry's hair to address gossips about his paternity.

DNA study can also reveal if an individual suffers from a genetic disorder or certain diseases—information that is usually kept confidential and may have serious implications if made public. In 2015, Professor Jacob Appel had warned that criminals "may acquire the capability to copy DNA of innocent people and deposit it at crimes scenes”.

Though DNA theft is a serious threat to the genetic privacy of individuals, it has yet not been declared a crime in most countries. The UK had declared theft and testing of an individual's DNA as a criminal offence in 2006. In the US, eight states currently have criminal or civil prohibitions on such non-consensual appropriation of genetic materials.

When decoded, genetic information could reveal critical information, and may even be used as a bioweapon in the future, studies say. In 2012, The Atlantic published a piece titled 'Hacking the President's DNA', in which the authors claimed the US government is secretively collecting the DNA of world leaders, and was reportedly protecting that of Barack Obama. “Presidential DNA could be used in a variety of politically sensitive ways, perhaps to fabricate evidence of an affair, fuel speculation about birthplace and heritage, or identify genetic markers for diseases that could cast doubt on leadership ability and mental acuity,” the report stated.

With rapid advances in biotechnology and genetic engineering, DNA theft is a major threat privacy and security.