Why Russian invasion of Ukraine could have serious global consequences 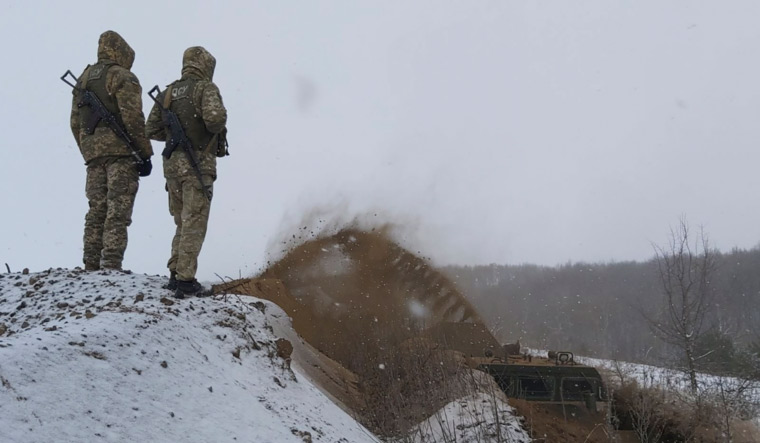 Russia’s demand to bar Ukraine from NATO has been rejected by the US, mounting pressure on the situation in the region. Russia seems keen to draw red lines on Ukraine’s borders.

As Moscow denies planning an attack, the United States and its NATO allies fear that Russia is planning for war. Secretary of State Antony Blinken stated the US made no compromises in response to Russia’s main demands on Ukraine and NATO.

Blinken said the US is sticking to its previously stated positions. He said, however, that the written answer to Russia includes credible offers for a diplomatic way to de-escalate skyrocketing tensions over Ukraine by addressing Russian concerns on other issues.

The US response comes as Russia threatens retaliation if the US and its allies refuse to meet its security demands and continue to pursue aggressive actions in Ukraine.

Soldiers and residents in eastern Ukraine are watching, waiting to see if conflict will break out. They are aware that politicians in distant capitals are deciding their fate. Even politicians in Kyiv, Ukraine's capital, have been left on the sidelines of many rounds of high-stakes negotiations that have so far failed to deliver a breakthrough.

Since 2014, the battle-weary region has been battling pro-Russia separatist forces. It is an area close to where Russia has massed tens of thousands of soldiers in a troop build-up that US President Joe Biden says could mount the largest invasion since World War II.

In a latest development, China has backed Russia with Chinese foreign minister Wang Yi saying restraint must be exercised in the situation and that the US should be more mindful of Russia's security concerns. Yi, on Thursday, in a call to US secretary of state Anthony Blinken said, “Russia's reasonable security concerns should be taken seriously and resolved."

Wang, during the conversation with Blinken, referred to the Minsk Agreement, also known as the Minsk protocol, which was drafted in 2014 and 2015, and put an end to the separatist war in eastern Ukraine involving pro-Russia speakers. Yi indicated that as long as the efforts are made in line with the direction and spirit of the agreement, China will support them.

There's still room for diplomacy in the Ukrainian crisis. At least that's the conviction of French President Emmanuel Macron, who continues to push for dialogue with Russia despite signs pointing to a potential war.

Macaron's position echoes France's post-World War II tradition of forging its own geopolitical course rather than following the US blindly. It is also part of Macron's domestic political plan ahead of the presidential election in April when nationalists are driving the debate and war in Ukraine may be an unwelcome diversion.

Macron is set to meet with Russian President Vladimir Putin on Friday, and Macron's presidential palace held protracted meetings between Russian and Ukrainian experts on Wednesday, the first such face-to-face talks since Russia massed troops near Ukraine in recent weeks.

The meetings with Russian, Ukrainian, French, and German advisers on January 26 appeared to buy time for all parties, as they agreed to meet again in two weeks. However, France's diplomacy-focused strategy challenges US and NATO efforts to present a united front against Russia. Experts are divided on whether it will be sufficient to prevent a Russian invasion of Ukraine.

According to French government spokesperson Gabriel Attal, Macron's contact with Putin on Friday morning had two goals: to continue the dialogue and to press Russia to define its position and the goal of manoeuvre.

A full-blown conflict in the region could be catastrophic—causing unprecedented human suffering and economic shock. It would also cause the realignment of geopolitical forces in the region. A Russian invasion would also mean a toppling of an elected government in an eastern European nation due to foreign invasion. The suppression of Ukraine through warfare would mean Sweden and Finland joining forces with NATO and the US, a big blow to Russia. Russia’s $600 billion in its central bank reserves means that it would survive any economic sanctions by western forces in case Russia does decide to charge towards Ukraine.

A limited invasion or a cold war by Russia could, however, claim several casualties on both sides. Russia choosing other means of suppression like throttling supply of piped gas or hiking prices of metals, of which it is a big source of and hiking price of wheat, could mean adverse effects on Ukraine’s and European economy. Putin could push to probe into NATO’s collective security pact with help from Russian security forces in Belarus. As per the pact, an attack on NATO members means an attack on all.

A Russian invasion of Ukraine could encourage China to make a move on Taiwan, something the US and other western forces have been trying to deter. An invasion would also mean Putin’s undoing—the wise thing for Putin to do would be to back down.