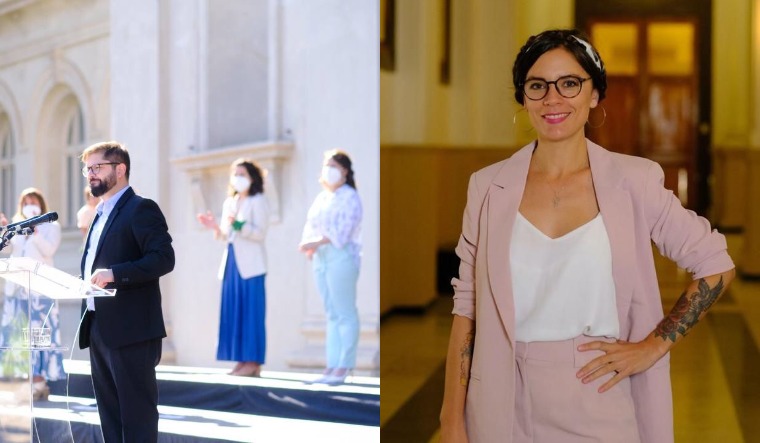 A collage of Gabriel Boric and Camila Vallejo | Via Twitter

Gabriel Boric, president-elect of Chile, has announced a cabinet with women in majority. Of the 24 cabinet posts in total, he has given 14 to women.

Boric—who at the age of 35 is the youngest person to become Chile’s president—has chosen a young, inclusive and progressive team. The average age of the cabinet is 49.

Boric has made Salvador Allende’s granddaughter, Maya Fernandez Allende, defence minister. This is the best way of paying tribute to the leftist president who was overthrown by the rightist military in 1973. This is poetic justice. She will initiate reforms in the Chilean military, which has been enjoying sweetheart deals and privileges inherited from the dictatorship era. Maya Fernandez’s family lived in exile in Cuba after the Chilean military coup and she returned to Chile in 1990. Her father was a Cuban diplomat.

The new interior minister is another woman, Izkia Siches, ex-militant leader of the Communist Party. She will oversee the police, which used high-handed methods against the student protesters.

The Communist Party firebrand and student protest leader Camila Vallejo (age 33) will be the spokesperson of the government. She was president of the University of Chile Student Federation and the main spokesperson of the Confederation of Chilean Students. Described as “the world's most glamorous revolutionary” by The New York Times, she became an iconic figure in Latin America. Vallejo's father and mother were members of the Communist Party.

Camila Vallejo was a rival to Gabriel Boric in the student movement. She had lost a student union election to Boric.

Boric has chosen the 62-year-old Central Bank chief and socialist leader Mario Marcel as finance minister. This has given the right message and reassurance that he would not do anything drastic to upend the macroeconomic fundamentals of the country.

Boric’s choice of a women majority in the cabinet complements the gender parity of the Chilean Constitutional Assembly, which has fifty per cent women, the first of its kind in world history to have such gender parity. It has 78 men and 77 women. The first president of the assembly was a woman Elisa Loncon, a member of the indigenous Mapuche group. She has now been replaced by another woman, Maria Elisa Quinteros.