Harris still struggling to define herself one year in VP job 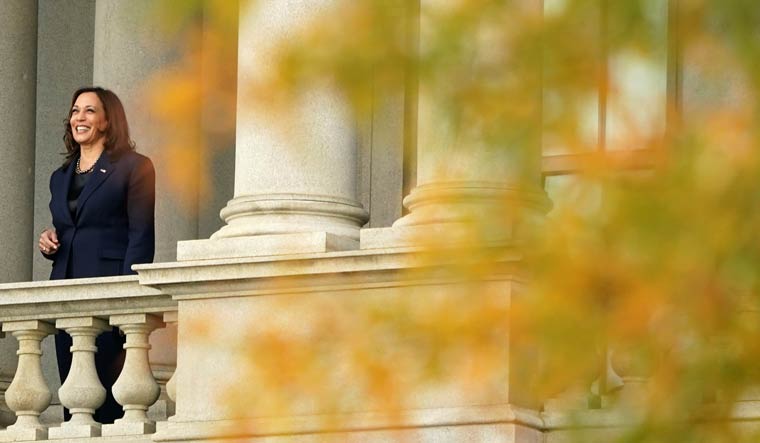 President Joe Biden put the full weight of his presidency behind voting rights action last week, heading to Capitol Hill in an effort to push Democrats to change Senate rules to pass legislation.

Vice President Kamala Harris — whom Biden tapped to take the lead on passing voting rights legislation in June — wasn't there.

Both White House press secretary Jen Psaki and Harris aides had no clear answer when asked why the vice president didn't join Biden in the meeting.

It was yet another example of the difficulty Harris has faced throughout her first year in office, as she's struggled to define herself and her role. Harris has grappled with an expansive portfolio of difficult assignments, fielded questions about her relationship with the president and faced what allies say is unprecedented scrutiny for a vice president — without, some worry, adequate support from the White House.

And she's navigated all that within the constraints of a global pandemic and a duty to act as the tie-breaking vote in an evenly-divided Senate that have restricted her ability to travel beyond Washington.

“It's tough for any vice president to shine — even in the best of times. And these aren't the best of times,” said Roy Neel, who served as chief of staff for former Vice President Al Gore. “You not only serve at the pleasure of the president, for any public activities, but there's a limit to how much you can do to take the lead role on the major issue of the day, whatever that is, and to go out and look like you're killing it.”


Indeed, Harris' aides say privately that the vice president is careful not to get ahead of the president, never wanting to take credit for the administration's successes. She will also often say that while she offers her frank opinions to the president privately, her public role is to ensure he is successful.

But that's left some Harris supporters, who warmed to her as an outspoken progressive voice in the Senate on issues ranging from police reform to voting rights, frustrated at what they see as her absence on key issues. During a recent interview with media personality Charlamagne Tha God, when Harris dropped her typically pleasant demeanour and sharply defended Biden, Charlamagne took note. “That Kamala Harris? That's the one I like,” he said. “That's the one I'd like to see out here more often in these streets.”

Many of the issues on Harris' plate have no clear solution or immediate payoff. She's been tasked with pushing broadband access, leading the Space Council, driving for passage of the voting rights bill and addressing the root causes of migration to the U.S. Southern border. Republicans in particular have targeted Harris for her work on immigration, charging she hasn't done enough as a significant increase in migrants at the border has bedevilled the administration.

She's also drawn criticism from the left for her work on immigration, after she told migrants directly “do not come” to the U.S. during her trip to Guatemala and Mexico last year. Progressive Democratic Rep. Alexandria Ocasio-Cortez of New York tweeted that Harris' comments were “disappointing to see.”

Domingo Garcia, the national president of the League of United Latin American Citizens, said he wanted to see more from the former progressive senator during that trip, calling it “a day late and a dollar short.”

“I mean she went to Central America, she took no meetings with community groups or civic groups involved in the issue. And so it's almost like they don't have a sounding board, and they're groping around in the dark for a solution,” he said.

Harris, who declined to be interviewed for this story, has dismissed questions about the difficulty of her portfolio, insisting she relishes taking on difficult assignments. But privately, a number of her allies have complained that the vice president not only has some of the administration's most thankless tasks, but that she hasn't been given enough support or resources from the White House to deliver on them.

And the grind of the office has clearly taken its toll. Harris has drawn negative headlines in recent weeks for an exodus of top aides, including her former communications director and former chief spokesperson, with anonymous aides complaining of a difficult work environment from an overly tough boss.

Still, some of Harris' biggest constraints are largely out of her control: The pandemic, and the demands on her time as a tie-breaking vote in the Senate. Harris hasn't been able to do as many public, in-person events as she and her aides would like due to the pandemic, and she's done only a fraction of the international travel typical of a vice president, which has reduced her diplomatic engagements largely to virtual meetings or phone calls.

She's also tethered to Washington because of the unpredictability of the Senate schedule. Harris has cast 15 tie-breaking votes so far, the most of any modern vice president, and must stay in Washington most weeks in case a nomination comes up for a vote.

“It really isn't a source of power or influence, because really, all she's doing is voting the administration line,” said vice presidential historian Joel Goldstein. “It's really a constraint, because it restricts her ability to do other things.”

Early in the year, it seemed like Harris was a bigger target for Republicans than Biden. Now that's less so. A Gallup poll in December showed 44 per cent of Americans saying they approve of how Harris is handing her job as vice president; 54 per cent disapprove. That was similar to Biden's rating in the survey.