During the conflict, he was second in line to the throne after Charles 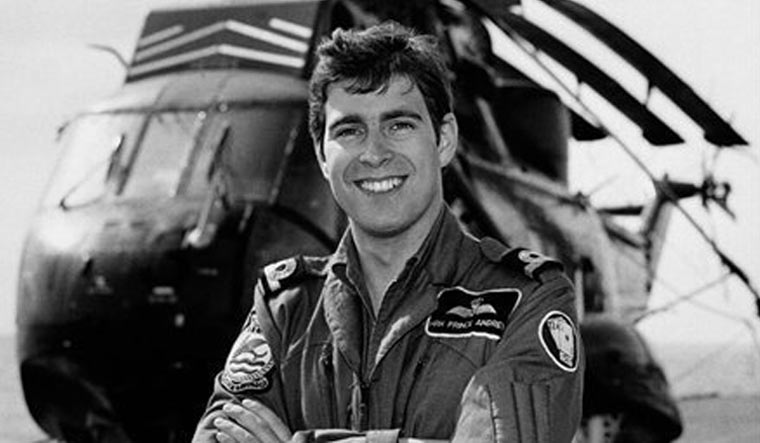 Prince Andrew in front of a Sea King helicopter | Via Twitter

Ever since 2011, Britain's Prince Andrew has been under intense scrutiny for his links to late millionaire and alleged sex trafficker Jeffrey Epstein.

On Thursday, Buckingham Palace announced Prince Andrew had returned all his royal patronages and military honours, marking a steep descent for a prince who was hailed as a war hero 40 years ago.

Andrew served as a helicopter pilot in the Royal Navy task force that was dispatched to evict Argentine invaders from the Falkland Islands in April 1982.

Andew's Sea King helicopter was capable of performing many roles such as anti-submarine warfare, troop transport and search and rescue. But it was for a particularly daring sort of mission that Andrew became famous for: 'Decoying' enemy anti-ship missiles.

The French-designed Exocet anti-ship missile was considered a state-of-the-art weapon during the Falklands war. The Exocet flies at very-low levels over the waves to evade enemy radars. Argentine aircraft used Exocet missiles to sink a Royal Navy destroyer, the HMS Sheffield, and a container vessel, the Atlantic Conveyor, which carried a large number of helicopters. Another Royal Navy warship, the HMS Glamorgan, was seriously damaged in an Exocet attack.

The Royal Navy's inventory of surface-to-air missiles at the time proved inadequate to deal with the Exocet threat as the French missile was difficult to track by radar. The Royal Navy also lacked fast-firing guns to destroy incoming missiles at short range.

As a result, a key method of defence for the Royal Navy was electronic warfare: Ships were equipped with chaff, strips of metal that confused the radar seeker of an incoming missile into thinking that the metal was another target.

Another method was to deploy helicopters that carried electronic decoys that mimicked an imaginary target. The helicopters would hover in the vicinity of Royal Navy ships and lure incoming Exocet missiles away. The Royal Air Force used Lynx helicopters for the role, while the Royal Navy used Sea Kings.

Prince Andrew, who was stationed on the aircraft carrier Invincible, spoke of his work in June 1982. Andrew claimed he flew patrols for up to four hours to protect the Invincible.

He recalled he was on decoy duty when the Sheffield was hit by an Exocet missile. “For the first 10 minutes after the Sheffield, I think when one really didn't know which way to turn or what to do... I know where I was and I was very frightened then, " Andrew was quoted as saying by United Press International.

Andrew was also praised for rescuing sailors from the sinking Atlantic Conveyor. Referring to the attack on the Atlantic Conveyor, Andrew was quoted by United Press International as saying, “... The moment that really sticks in my mind is Atlantic Conveyor, which I saw hit, and the aftermath of that, having been in the rescue operation. It was something I shall never, ever forget. It was quite horrific. At the same time, I saw a 4.5 shell come quite close to us. I saw my ship. Invincible, firing her missiles. Normally I would say it was spectacular, but at the time it was very frightening.”

A British ministry of defence spokesperson described him as being “one hell of a helicopter pilot”.

During the Falklands war, Andrew was second in line to the throne after Crown Prince Charles.

On his return to the UK after the Falklands campaign, Andrew came “back a hero and was very much the golden boy of the Royal family”, veteran royal correspondent Katie Nicholl told Mirror.

However, after the heyday of the Falklands war, Andrew's reputation has been in steady decline over reports of his marital indiscretions and links to controversial politicians in his role as a trade envoy, before touching the nadir with the Epstein saga.