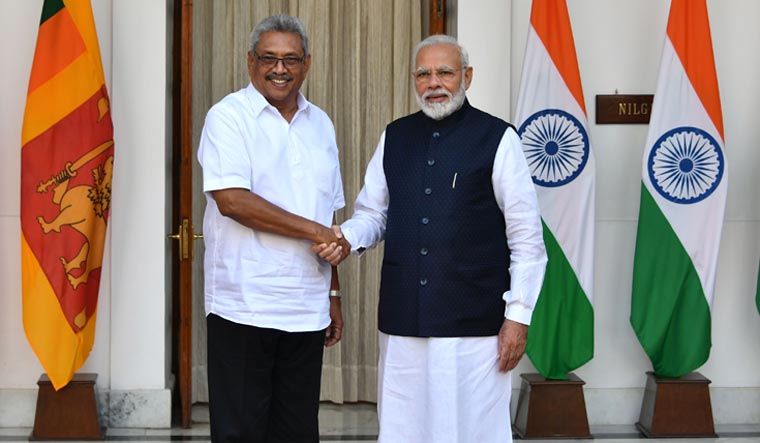 It seems to be a glimmer of hope in the India Sri Lanka relationship that even under the Gotabaya Rajapaksha government, economic and energy security deals are being struck with India. Sri Lanka, while playing a balancing act with China, might have realised after the Hambantota port experience that it might not be such a good idea to be reliant on Chinese investments in critical areas.

The Sri Lankan cabinet has approved the development of Trincomalee Tank Farms jointly with India. These oil farms are of British era vintage. The deal is with Indian Oil Corporation, which will hold a minority stake, while Ceylon Petroleum Corporation will be the majority partner. The deal is in three phases, the first is to modernise 61 of the 100 farm tanks. Given the proximity of Trincomalee to India, the country was keen to win this deal, as having another partner, especially China, was not the best of situations. As Arindam Bagchi of the Ministry of external affairs said of the deal: THis will allow for storage of fuel and will augment bilateral energy security.

Sri Lanka is in economic distress. Food queues are reportedly long, supplies whether of food or cooking gas exorbitant and sporadic as the country diesn;t have the money to pay for imports. The Gotabaya government is under pressure. A bad deal with China to import organic fertilisers has not just soured that bilateral but added to the existing agrarian crisis. Sri Lanka had planned to make its agriculture completely organic, a move that would also raise the stock of its agricultural exports. However, last year, it had to return a shipment of fertiliser from a Chinese company because it was reportedly not sterile. The bad deal struck a big blow to the nation's agriculture.

Chinese foreign minister Wang Yi is scheduled to visit Colombo shortly. There is enough Chinese investment in Sri Lanka, which is not going to vanish anytime soon just because there have been issues with a deal or so here and there. Yi will certainly attempt reviving the fertiliser deal and offer other, alluring deals, too. Sri Lanka may not turn away from them.

India, however, is finding a steady toe hold in the island country even under the tenure of a government that has not traditionally been `pro India'. The development is positive for India. Earlier, Sri Lanka cancelled a solar power project with a Chinese firm because a third country (India) voiced security concerns. India will in no way be able to be the sole provider of economic and energy security to Sri Lanka. For Sri Lanka, however, to understand India's concerns, and also, to not put all its eggs in the Chinese basket, makes sound sense for the country, too.

Sri Lanka has approved a bid by Ashok Leyland for 500 new buses and by Mahindra and Mahindra for 750 jeeps for its police force.

India has not yet committed to extending credit to Colombo, a request that Sri Lankan finance minister Basil Rajapaksa made during his visit to New Delhi last month. Bagchi said that the minister briefed India on their economic situation. ``India has always stood by the Sri Lankan people and Sri Lanka is an important part of our Neighbourhood First policy. During the visit, discussions took place on deepening cooperation in areas of food and health security, energy security, the balance of payment issues and Indian investments in Sri Lanka, among others. I understand that further consultations are ongoing.''