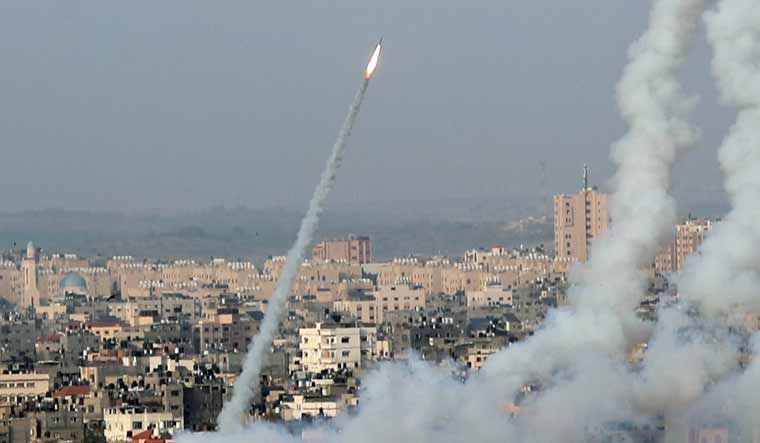 Rockets are launched by Palestinian militants into Israel, in Gaza May 10, 2021 | REUTERS/Mohammed Salem

The United Kingdom will declare the entirety of the Palestinian militant group Hamas a terrorist organisation, Home Secretary Priti Patel announced on Friday.

Hamas’s military wing, the Izz ad-Din al-Qassam Brigades, has already been proscribed a terrorist organisation. The new move will add its political unit to the list as well.

Under the UK’s anti-terror laws, membership in a proscribed organisation, inviting support for on, or wearing clothing which could be seen to support the group, is a criminal offence with a penalty of up to 10 years in jail and a fine. Hamas has already been designated a terror organisation by the US and EU.

Announcing the move on Twitter, Patel said Hamas had “significant” terrorist capability as well as access to “extensive and sophisticated weaponry” and terrorist training facilities.

Today I have taken action to proscribe Hamas in its entirety.

This government is committed to tackling extremism and terrorism wherever it occurs. pic.twitter.com/TQfPzomyIm

Since 2006, Hamas has maintained control of the Gaza strip. Since then, it had been the primary instigator of rocket attacks against Israel. In May, more than 3,440 rockets were fired towards Israeli communities, most of which were intercepted by the Iron Dome. 10 Israelis were killed in the attacks.

Hamas has accused the UK of supporting "the aggressors at the expense of the victims".