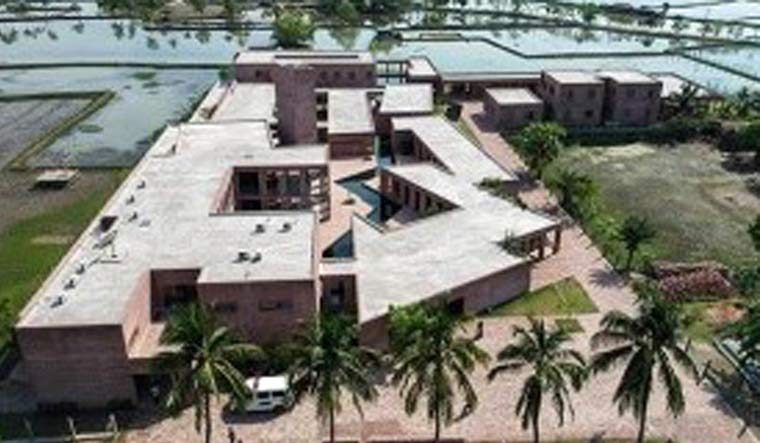 How often do we think about the impact hospitals have on the environment? Or their carbon footprint? Are hospital design strategies ever mindful of the peculiar ecological conditions of their location?

A remote community hospital in Satkhira district of southwestern Bangladesh, situated along the border with West Bengal, is in the running to win the best new building award by the prestigious body of architects, RIBA (Royal Institute of British Architects).

The 80-bed Friendship Hospital in a rural belt in Satkhira, close to the Sunderbans, is among the three shortlisted for the biannual RIBA international prize, which is given to outstanding design projects outside of the UK for their "design excellence" and "meaningful social impact." The other two contenders in the shortlist include a 160-metre long cycle and pedestrian bridge in Copenhagen called Lille Langebro and a cultural site in Berlin, James-Simon-Galerie.

This year, Puducherry-based architect Anupama Kundoo became the 16th winner of the 2021 RIBA Charles Jencks Award which is given for a "major contribution simultaneously to the theory and practice of architecture."

The Friendship Hospital in Satkhira is designed by Dhaka-based architect Kashef Chowdhury associated with the firm URBANA; his studio-based practice gives importance to "climate, materials and context." The hospital, made entirely of locally sourced bricks and mahogany, is on a fragile landscape where the underground water has turned completely saline, even though it is 60km inland from the sea. "The area is a special one because it is a real-time example of climate change," says Chowdhury on the phone from Dhaka.

Conceived around 2012 and completed in 2018, this hospital was built with funds from the non-profit Friendship NGO and has so far attended to some 70,000 patients from rural, riverine communities in the surrounding areas.

The design stands out in the way that it has allowed light and natural ventilation with a 10-feet wide meandering water canal snaking all across the length of the hospital site, built on a two-acre plot. "We had to differentiate the outpatients and the inpatient departments. We didn't want to do this by erecting a wall in the courtyard. So we introduced a water body which meanders throughout like a canal, collects the rainwater, and excess of it falls into a pond in the front. So people might see each other but can't cross," says Chowdhury.

The NGO brings in trained doctors from Europe who have set up eye-surgery camps and treated birth defects. "All wards, patient or waiting areas overlook courtyards and waterbodies and receive natural light," says Chowdhury, who informs that the hospital was built on a very low budget. He has previously been a finalist for the Aga Khan award for building a rural training centre in a riverine island. Chowdhury has also completed building a hospital for Rohingya refugees in Cox's Bazar; it is expected to be operational in the next three months.

Chowdhury says even though the Friendship Hospital looks artistic with its calm, seamless exteriors of interlocking courtyards, it works like a machine. "It is a very complex system in which the doctors, patients and the service people need to be separated, waste from the OT needs to be taken out without the patients seeing them. There are rules and codes to be followed. Movement of goods and people are very well calculated and executed."

The final award winner will be chosen from the shortlist in early 2022.