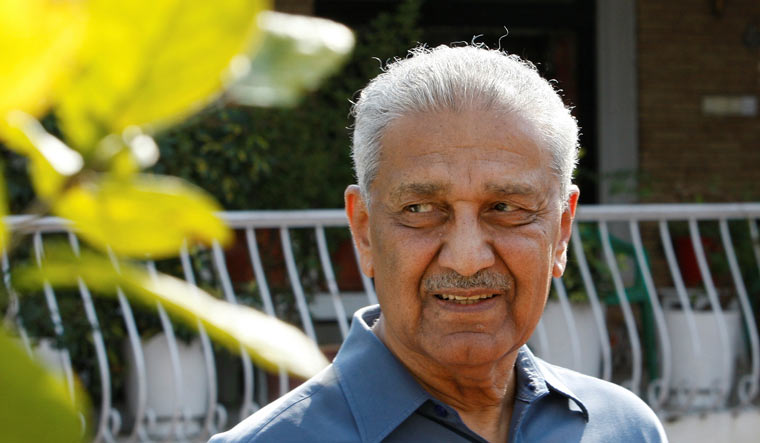 His views on India, Indians and Hindus were decidedly hostile. In February 2004, when A.Q. Khan confessed to being engaged in proliferation activities, well-known Indian-origin journalist Shyam Bhatia revealed details of a letter Abdul Qadeer Khan had written in 1980. The letter was in response to an article that Bhatia and Colin Smith had written in the British Observer newspaper in December 1979. The article alleged Abdul Qadeer Khan engaged in nuclear espionage in the Netherlands, where he worked until 1975. Abdul Qadeer Khan was, in fact, convicted by a Dutch court in absentia in 1983 for espionage.

In the letter, written to the editor of the Observer, Bhatia claimed Abdul Qadeer Khan referred to him as a "Hindu bastard" who "could not write anything objective about Pakistan".

Bhatia claimed Abdul Qadeer Khan had claimed the article was "a bull-shit, full of lies, insinuations and cheap journalism for money and cheap publicity".

Multiple authors and biographers who had evaluated the life of Abdul Qadeer Khan claimed Partition and his train journey to Pakistan from India in 1952 shaped the late scientist's views of the neighbouring country. Abdul Qadeer Khan was born in Bhopal in 1936 and studied there until high school. Abdul Qadeer Khan was one of seven children born to a schoolteacher father, Abdul Ghafoor Khan. Ghafoor Khan retired before his son's birth to work for the Muslim League, which was fighting for a separate Muslim homeland.

In the 2007 book, The Nuclear Jihadist: The True Story of the Man Who Sold the World's Most Dangerous Secrets...And How We Could Have Stopped Him, authors Douglas Frantz and Catherine Collinshe noted Abdul Qadeer Khan inherited his "father's fervor for an Islamic state and his hatred of India".

The book claims Abdul Qadeer Khan witnessed the horrors of Partition. It states, "Khan was eleven years old at the time (1947), and the violence was seared into his memory. His family watched in horror as Muslims flooded their neighborhood in Bhopal, still considered a sanctuary in those bitter days, bringing spine-chilling tales of atrocities committed by Hindus. Khan later described having seen trains packed with the corpses of Muslims killed in the sectarian fighting."

The book stated Ghafoor Khan decided to send Abdul Qadeer Khan to Pakistan as he thought "there was no future for his youngest son in India, which he believed discriminated against the Muslims who had remained behind."

Abdul Qadeer Khan told a biographer that he decided to leave India given his distaste for being a "second-class citizen".

The train journey to what was then West Pakistan in 1952 also played a role in shaping the thoughts of Abdul Qadeer Khan. The book quoted Abdul Qadeer Khan as saying, "I was alone... Luckily there were a number of Muslim families traveling with us. The attitude of the Indian police and the railway authorities toward these shattered families was extremely hostile, degrading and insulting. The mischievous behavior will always remain fresh in my memory. They snatched every valuable thing from these poor people."

The book claimed a policeman took a prized pen from Abdul Qadeer Khan, an incident that "framed his view of Indians for a lifetime, and he recounted it whenever he talked about his distrust of Pakistan's neighbor”. The book claimed Abdul Qadeer Khan told a friend, "Hindus are crooks and mischievous... They are dreaming of destroying Pakistan to create a united India."

Pakistan's defeat in the 1971 war and loss of East Pakistan (now Bangladesh) was also a blow to Abdul Qadeer Khan. In an interview in 2009, he referred to television footage of the surrender of Pakistani forces in 1971. Abdul Qadeer Khan told the interviewer, “Hindus and Sikhs were beating them with shoes, and their heads were being shaved in concentration camps. I saw those scenes with horror."