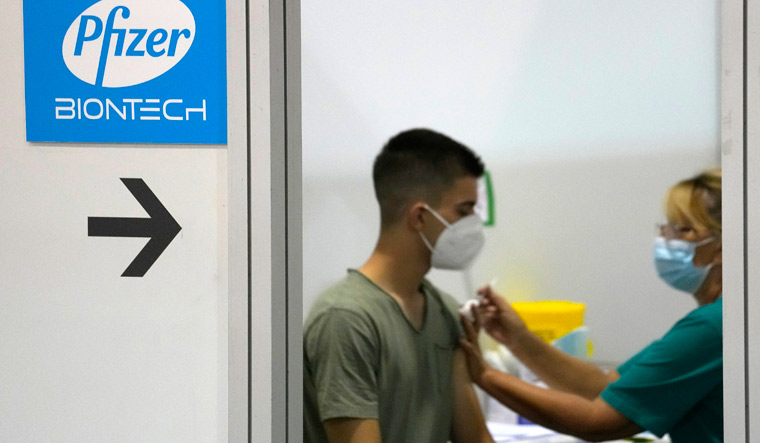 Two world studies, from Israel and from Qatar-- published in the New England Journal of Medicine, has said that immunity against the coronavirus wanes two months after taking the Pfizer vaccine. The report comes a day after a study was published in the Lancet journal that said that the Pfizer vaccine against the coronavirus disease is highly effective at preventing hospitalisations from infections of all variants – including Delta – for at least six months after a person has been administered two doses of the said shot.

A study from Israel showed that antibodies in 4,800 healthcare workers waned rapidly after two doses of the vaccine, "especially among men, among persons 65 years of age or older, and among persons with immunosuppression."

The study from Qatar looked at the vaccinated population of the Gulf nation, where most people received the Pfizer/Biontech vaccine. The Pfizer/Biontech vaccine is also known as BNT162b2. "BNT162b2-induced protection against infection builds rapidly after the first dose, peaks in the first month after the second dose, and then gradually wanes in subsequent months," Laith Abu-Raddad of Weill Cornell Medicine-Qatar and colleagues wrote. "The waning appears to accelerate after the fourth month, to reach a low level of approximately 20% in subsequent months," they added, a CNN report reads.

"We found that a significant and rapid decrease in humoral response to the BNT162b2 vaccine was observed within months after vaccination," Dr Gili Regev-Yochay of Israel's Sheba Medical Centre wrote.

In the Lancet study validating the vaccine's effectiveness, researchers found that only the effectiveness of the Pfizer vaccine did not decline significantly over the study period, as opposed to that of other vaccines which declined against all SARS-CoV-2 variants within one month of the two doses being administered. The research team analysed 3,436,957 electronic health records from the Kaiser Permanente Southern California health system between December 4, 2020, and August 8, 2021, to assess vaccine effectiveness against SARS-CoV-2 infections and Covid-related hospitalisation.

During the study period, 5.4 per cent of people were infected with SARS-CoV-2. Among those who were infected, 6.6 per cent were hospitalised. Researchers did not observe a difference in waning between SAR-CoV-2 variant types.

However, they noted that because Delta became the dominant strain in the middle of the study period, analyses with longer follow-up to measure the rate of waning for the variant compared to other strains are needed.

“Our variant-specific analysis clearly shows that the BNT162b2 vaccine is effective against all current variants of concern, including Delta,” said Luis Jodar, senior vice-president and chief medical officer, Pfizer Vaccines.