Venezuelan currency Bolivar undergoes yet another 'surgery' for removal of zeroes 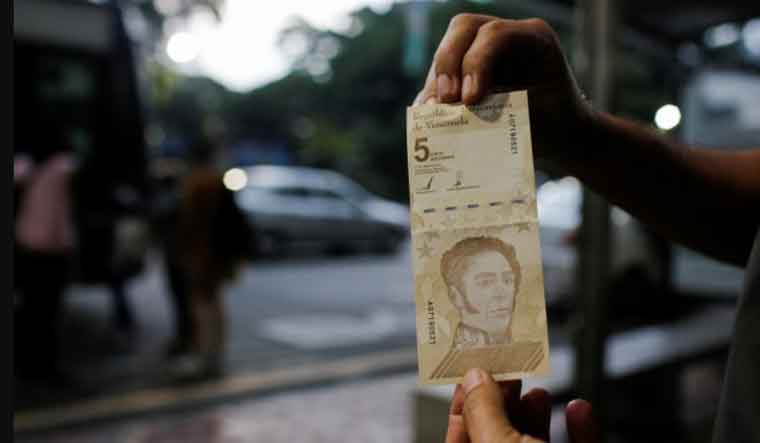 The Venezuelan government removed six zeroes from its currency Bolivar on October 1. The surgery became necessary when the currency lost its value to ridiculous levels causing massive inconvenience to people. A loaf of bread cost 7 million Bolivars and a bus ticket came at 2 million Bolivars. So it became a mathematical nightmare for people to calculate and pay for high value items. It was nothing but magical realism. Every Venezuelan was a millionaire but quite a lot of them were “poor millionaires”. Since the currency notes were also scarce like all other essential items, people had to queue up in front of banks for many hours. And they were allowed to take out only 20 million Bolivars a day. It was nothing but a nightmare.

One million Bolivar (equal to 25 US cents) has now become just 1 Bolivar with the issue of new currency notes called as Digital Bolivars.

This is the third time that the Venezuelan government did surgery for removal of zeroes. In 2008 President Chavez removed three zeroes and introduced Bolivar Fuerte (strong). His successor Maduro deleted five more in 2018 and called the new currency as Bolivar Soberano (sovereign). So it is a loss of 14 zeroes in 13 years ! Quite a record..

Besides the zero surgery, the government had introduced in the past several different exchange rates for imports of essential items, travels etc. This gave rise to large scale black market, corruption and abuse by those close to the authorities.

The currency devaluation and change are just small parts of the larger tragedy. The GDP of the country has gone down by 80 per cent since 2013. The country has the highest inflation in the world. It was 3000 per cent in 2020 and 9500 per cent in 2019, according to the Venezuelan Central Bank. The inflation in 2021 is forecast to be 1600 per cent. There is acute shortage of food, medicine and essential items. People have to queue up for hours in front of supermarkets and pharmacies. There are frequent power cuts and shortage of water. Most international airlines have stopped flights to Venezuela due to payment issues.

Crime and violence is rampant in Caracas which has one of the highest murder rates in the region. Poverty has increased dramatically. There are more poor people today than before Chavez came to power in 1999.

Unable to tame the inflation and currency devaluation, the government has quietly allowed dollarisation of the market. Seventy percent of the transactions are done in US dollars, according to some estimates. Many shops display prices in US dollars. Since the dollar revenue from the main exports of oil has been crippled by the US sanctions, there are not many dollars to go around in the market. The new source of dollars is the remittances from the 4 million Venezuelans who have fled to other countries of Latin America, US and Europe.

The genesis of the currency and economic crisis goes back to the coup against President Chavez in 2002. The Venezuelan oligarchs and businessmen were the main coup conspirators. Pedro Carmona, the president of the Venezuelan Chamber of Commerce became the interim president after the overthrow of Chavez. However, the coupsters mismanaged the coup and Chavez came back to power in just 48 hours. Chavez then unleashed a ferocious campaign of revenge against the business community by introducing foreign exchange and import controls, nationalization of industries and other punitive measures. He did not care about the economy or industry. His only aim was to teach an unforgettable lesson to the businessmen. He changed his agenda from “ pro-poor” to “ anti-rich” and took total control of the economy. No one in his cabinet or party dared to oppose Chavez, who became the absolute authoritarian. The Chavista economic advisers and administrators who were neither qualified nor experienced, resorted to ad hoc policies to suit the whims of Chavez. He gave positions and powers to thousands of Chavistas and military officials and let them become corrupt and his accomplices. Maduro who succeeded Chavez has simply inherited the system and he is not powerful or charismatic enough to control others. So the country is bleeding with multiple political, economic and social wounds.

Trump tried regime change with overt bullying and covert operations but failed. He took the illegal and unilateral US sanctions to an absurd extreme by announcing a 15 million dollar bounty for the arrest of President Maduro on drug trafficking charges. This is besides the 30 million dollar bounty on the heads of some ministers, generals and judges.

The US engineered the formation of Lima Group with some Latin American countries to recognise Guaido as President and deal with the Venezuelan crisis.This was supported even by European Union. But now the Lima Group has become an anticlimax after the new leftist government of Peru has exited from the group and recognized the Maduro government. Earlier the leftist governments of Argentina and Bolivia also left the group, which was recognized by their rightist predecessors.

The opposition lead by Juan Guaido has done worse by seeking external intervention from US. His attempts and promises to bring down the Maduro regime have failed miserably. He has lost credibility.

Now the Opposition has realised rightly that the only way for resolution of the crisis is to take part in the elections and fight the Maduro regime democratically and constitutionally.

Credit should be given to Mexico which is facilitating the negotiations between the Venezuelan government and the opposition.