Lessons on life, mortality and repatriation from the Epic of Gilgamesh 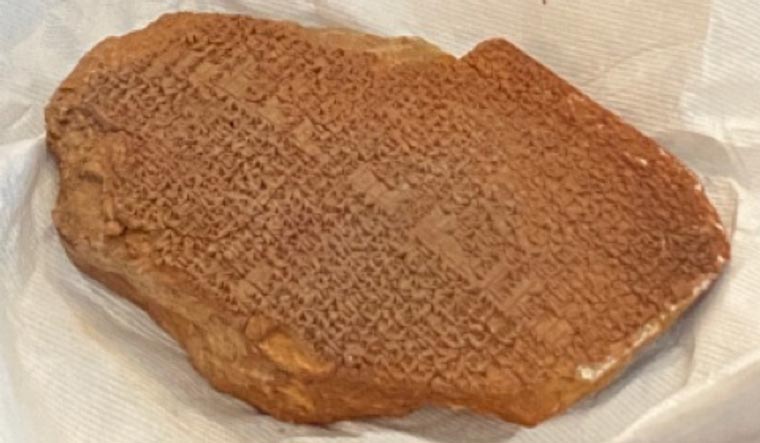 A photo of the tablet released by the U.S. Immigration and Customs Enforcement

Over 4,000 years ago, one of the first pieces of human literature concluded with an ever-lasting message: Everyone dies. More specifically, all mortal beings die—but their deeds may still live on forever.

The Epic of Gilgamesh, pieced together over many centuries from thousands of fragments, has so far proven its relative immortality.

It has, in order, survived the fall of the Ur Dynasty under whose it was written in, the centuries of invasions and purges that so scarred the ancient lands of the Middle East, the plunder of Western colonialism and the descent into chaos following the fall of the Ottoman Empire, the free-for-all looting spree of the collapsing Saddam Hussein regime, the Islamic State’s war on the past that made its brief reign so terrifying for archaeologists, and now, the excesses of American capitalism.

A fragment of this epic, written in cuneiform on a clay tablet dubbed the “Dream Tablet”, was recently returned to Iraq by the United States, after law enforcement agents seized it from craft retail chain Hobby Lobby.

Its journey from Iraq to Washington and back spans decades. Stolen from Iraq’s national museum in the events following the 1991 Gulf War, it was later introduced fraudulently in the US art market. In 2014, craft retail chain Hobby Lobby acquired it. US officials later said it had been illegally transported to the US in 2003 and 2014, imported under the “ceramic tiles” label. The Hobby Lobby, which had displayed the tablet at its Museum of the Bible in Washington, acknowledged its error and blamed it on inexperience. Hobby Lobby was fined $3 million in 2017 over the smuggling scandal and the tablet, as well as hundreds of other items, was forfeited.

In 2019, US Justice Department officials seized the Gilgamesh Dream Tablet from Hobby Lobby.

Audrey Azoulay, director-general of the United Nations agency UNESCO, said the return was "a major victory over those who mutilate heritage."

“By returning these illegally acquired objects…the authorities here in the United States and in Iraq are allowing the Iraqi people to reconnect with a page in their history,” she said.

The US signed over the tablet to Iraqi officials at a ceremony at the Smithsonian Institution’s Museum of the American Indian in Washington. The tablet is the last of over 17,000 artefacts being returned to Iraq from the US since August.

What is the cultural impact of the Epic of Gilgamesh?

Great works of literature often see echoes of their themes and plot points in later writings. Both Homer’s Odyssey and the hero motif of the Greek god of Hercules are believed to be linked to the Epic of Gilgamesh. And, aspects of the Creation Myth of the Bible, the story of Adam and Eve, the details of Noah’s Ark and others, all resemble events described in the epic.

Works like the Epic of Gilgamesh testify to the ancient legacy of the land we now call Iraq, which was settled as far back as 6,000 BC.

The plot remains entertaining thousands of years after its publication: An ancient Uruk king called Gilgamesh was infamous for his misdeeds (which included forcibly sleeping with unmarried women prior to their weddings). In a bid to tame him, the ancient Mesopotamian gods sent a beast to conquer him—a demon monster named Enkidu. Enkidu and Gilgamesh had a fierce and long battle before Gilgamesh triumphed by a hair. Out of mutual respect for each other’s abilities, they become close friends. Enkidu then accompanies Gilgamesh in the rest of his adventures.

Enkidu is eventually killed by the gods, prompting Gilgamesh to reflect on his mortality. He sets out on an adventure to attain immortality, travelling to the end of the earth. He is finally told to obtain an underwater plant which was promised to grant him immortality. He gets the plant—but then loses it to a snake. Upon returning dejected to his kingdom, he realises the inevitability of his own mortality, and the true merit of becoming “immortal”—through the ever-lasting impact of his deeds.

The Epic itself is incomplete: As recently as 2015, missing lines from the epic were found in Iraq. A twelfth tablet purports to tell an “alternative” legend about Enkidu.

Significance of returning the Epic to Iraq

With the return of one of its fragments, the US acts on growing calls to return ancient artefacts to their countries of origin. The repatriation of ancient artefacts proves tricky, as it means negotiating with the smuggling underworld, differing interpretations of a UN Convention on illicit trafficking that was widely taken to mean that objects taken from their home country before 1970 could be kept, museums reluctant to lose their star attractions, and the challenge of identifying the country-of-origin for many ancient artefacts.

The remaining fragments of the Epic are all over the world: Some are in Iraq’s Sulaymaniyah Museum, Iraq’s second biggest museum after the national museum. Other parts of the Epic of Gilgamesh remain with the British Museum in the UK—which has notoriously accumulated historical and cultural artefacts from most of the world’s civilisations.

In 2017, the British Museum returned hundreds of artefacts to Iraq, including over 150 inscription tablets. Several museums across the world have started returning such artefacts to their countries of origin, often as diplomatic gestures.