US, South Korea announced they were monitoring the situation, consulting with allies 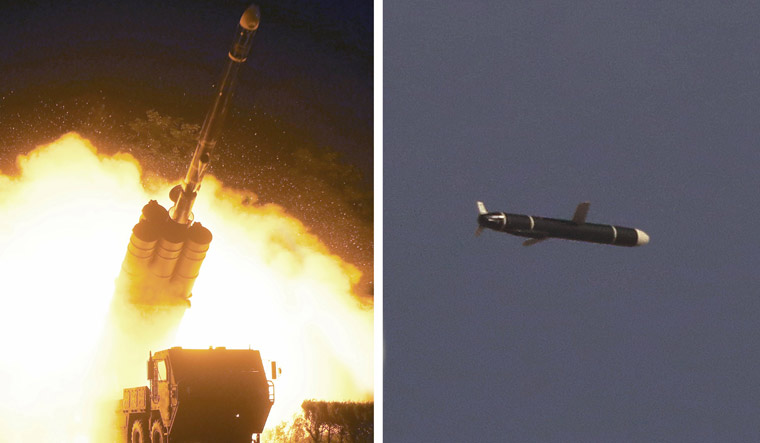 Korean Central News Agency announced the cruise missile had been in development for two years. The weapon demonstrated capability to hit targets 1,500km (932 miles) away in the tests on Saturday and Sunday.

These are the first known weapons' tests by North Korea in months as a stalemate persists with the US over negotiations on its nuclear programme.

KCNA reported the missiles "traveled for 7,580 seconds along an oval and pattern-8 flight orbits in the air above the territorial land and waters" of North Korea.

The US and South Korea announced they were monitoring the situation and consulting with allies and partners.

While cruise missiles are much slower than ballistic missiles and have lower ranges, they can fly at lower altitudes, making them harder to detect.

Hong Min, a senior researcher at the Korea Institute for National Unification, a South Korean think tank, stated the development of the weapon appeared to have started after "mid-2019". He also warned North Korea could deploy the weapon from submarines, making detection even more difficult.

“Given that the missile development was launched two years ago as part of the five-year plan, the project appears to have started after mid-2019...The North could continue such tests so as to make them smaller as part of the five-year plan, and there is also a possibility that the missiles could be developed to be able to be launched from submarines," Hong was quoted as saying by Yonhap.

Ankit Panda, a senior fellow at the US-based Carnegie Endowment for International Peace, opined the cruise missile could be meant to carry nuclear warheads.

“This would be the first cruise missile in North Korea to be explicitly designated a ‘strategic’ role... This is a common euphemism for nuclear-capable system,” Panda told Reuters.

Interestingly, the test of the new cruise missile comes weeks after South Korea confirmed it had tested a ballistic missile from a new diesel-electric submarine.