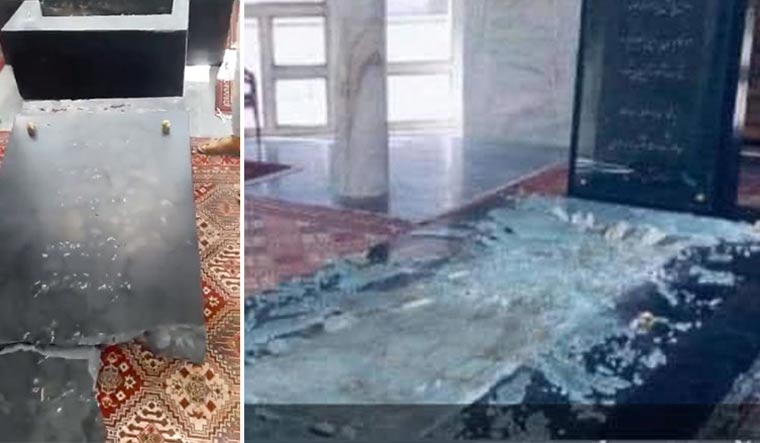 Videos and photos shared on social media show the marble shrine in a state of tatters, with broken glass over the tomb

Days after taking over the Panjshir Valley—the last province in Afghanistan not controlled by the Taliban—the group has reportedly desecrated the shrine of its most iconic figure, Ahmad Shah Massoud, on the 20th anniversary of his assassination at their hands.

Videos and photos shared on social media show the marble shrine in a state of tatters, with broken glass over the tomb.

The visuals triggered outrage on social media, with some users pointing out that the Taliban had smashed glass with Quranic verses on it.

The following verses were written on the glass on the stone of Ahmad Shah Massoud's tomb, which Taliban broke with disrespect:

in the name of God
And do not say, "Whoever kills in the way of God, the dead will not be resurrected, but they will not be warned." وَلَنَبْلُوَنَّكُمْ pic.twitter.com/9sNdpz1dl2

In 2021, his son, Ahmad Massoud, led the resistance against the second Taliban regime, holding the Panjshir valley for weeks after Taliban took over Kabul. However, the Taliban managed to gain control of the valley and raise their flag there, posing footage of the same on September 7. Taliban spokesman Zabihullah Mujahid said in a statement that "with this victory, our country is completely taken out of the quagmire of war".

Shortly after, Ahmad Massoud released a video calling for a “national resistance” against the Taliban and promising to support anyone who stands against the regime. Massoud decried the Taliban as a foreign force and called on the Afghan people to rise up against a “crippling humiliation brought on us today by foreigners!”

Around 1.5-2 lakh people live in Panjshir, a rugged and mountainous area that is difficult to completely conquer due to its suitability for guerrilla warfare.

Meanwhile, a video has emerged showing several members of the Resistance Front in terrain similar to that of the Panjshir Valley. “The war has just begun and the resistance continues,” they say in the video.