How Taliban taking over Afghanistan is bringing China and Russia together

China and Russia, for now, have chosen pragmatism over lofty ideals 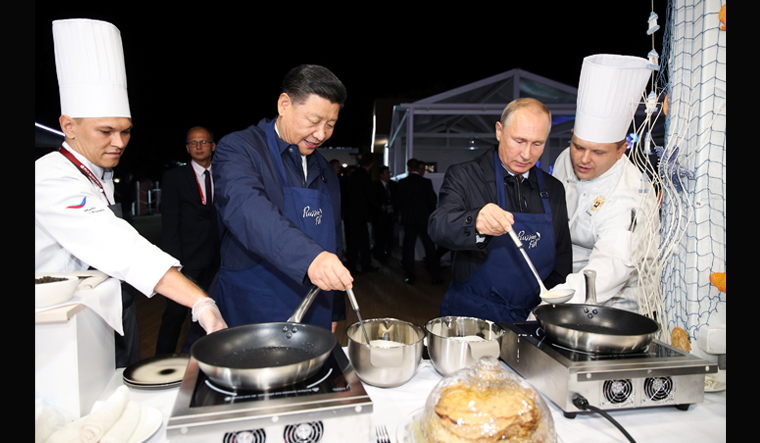 Russian President Vladimir Putin and Chinese President Xi Jinping make pancakes during a visit to the Far East Street exhibition on the sidelines of the Eastern Economic Forum in Vladivostok, Russia | Reuters

For most of the world, the rapid fall of Afghanistan to the Taliban was a major shock. But, for Russia and China, it was business as usual in Kabul. Both countries, along with Iran and Pakistan, have kept their embassies open and are in constant touch with the Taliban representatives, although they are yet to recognise the Taliban formally.

"China has all along maintained contact and communication with the Afghan Taliban on the basis of fully respecting Afghanistan's sovereignty and the will of all factions in the country, and played a constructive role in promoting the political settlement of the Afghan issue," said Chinese Foreign Ministry spokesperson Hua Chunying.

Even the US seems to be acknowledging the importance of the divergent tactics adopted by Russia and China. The first countries Washington reached out to after the fall of Kabul have been Russia and China, despite the contentious nature of their bilateral ties. US Secretary of state Anthony Blinken spoke with Russian Foreign Minister Sergei Lavrov and Chinese Foreign Minister Wang Yi separately. They discussed the situation and efforts to evacuate people safely. Blinken and Lavrov also discussed Moscow’s connection with various Afghan political forces that are aimed at "helping ensure stability and public order”.

The two "agreed to continue consultations with the participation of China, Pakistan and other interested nations to establish the right conditions to begin an inclusive inter-Afghan dialogue under the new conditions," according to a Russian foreign ministry statement.

There are a few reasons why Russia, China and, to a certain extent Iran, are dealing with the Taliban in a manner totally different from how they reacted when the Taliban captured power in 1996.

China wants to prevent the spread of radical Islam on its soil, especially in the restive Xinjiang region, where it has incarcerated more than a million Uyghurs. It needs the Taliban’s support to prevent a spillover of Islamic fundamentalism through Afghanistan’s northeastern borders, by reining in groups like the East Turkestan Islamic Movement (ETIM). It also does not want Afghanistan to be a sanctuary for anti-China fighters in Xinjiang.

Russia, too, is wary of its central Asian neighbours being affected by radical Islamist groups. It considers the central Asian republics like Tajikistan and Turkmenistan as its “soft underbelly”, and without the Taliban’s cooperation, it will find it increasingly difficult to keep radical elements away. Even within Russia, dormant militancy in provinces like Chechnya and Dagestan could be reignited with Taliban’s support. Two decades ago, the Taliban had even recognised Chechnya as an independent country. Russia, therefore, wants to keep the Taliban close, and has been in constant touch with the group in the past few years. It is also worried about the poppy and heroin that originate from Afghanistan and found its way into Russia, which once made Russia the biggest consumer of such narcotics.

THE BELT AND ROAD CHALLENGE

Apart from the threat of radical Islam, China is also worried about the security of its major infrastructure projects under the Belt and Road Initiative. Without an understanding with the Taliban, the BRI projects in the region, especially the ones under the China-Pakistan Economic Corridor, will be vulnerable to terrorist attacks. The BRI being the pet project of President Xi Jinping, China will take all possible precautions, including working with the Taliban, to keep it safe and running.

Russia, and more importantly China, are also aware of the vast natural resources, including mineral deposits in Afghanistan. A 2010 report by US experts estimated that Afghanistan has mineral deposits worth nearly $1 trillion with huge iron, copper, lithium, cobalt and rare-earth deposits. China will be keen to exploit these resources and it is unlikely to have any problem working with the Taliban, especially by providing the group significant economic incentives. A deepening economic cooperation with the Taliban will also help China keep India, which has been one of the key developmental partners, out of Afghanistan completely.

Keeping the US out of the region is a priority for China and Russia. While the US presence kept the Taliban and other such organisations under check to a large extent over the past two decades, both Russia and China have been uncomfortable about the American military presence in their backyard. For their security planners, it was a major strategic nightmare. Now that the Americans have vacated their bases completely, China and Russia would try their best to ensure that there is some sort of stability in the region to avoid even the remotest possibility of the US making a comeback under any pretext. Working with the Taliban seems to be the most pragmatic way to achieve this aim.

Another reason why Russia and China have decided to do business with the Taliban is the fact that unlike in the 1990s, there are no real internal challenges to the group so far. Back then, Russia and Iran had joined hands with India to prop up the Northern Alliance against the Taliban, but now there are no influential rebel leaders to counter the Taliban. The group has already taken charge of the northern and other border areas and neutralised nearly all potential challengers. There are reports about an anti-Taliban front forming in Panjshir under ousted vice president Amrullah Saleh and Ahmad Massoud, the son of the late legendary anti-Taliban commander Ahmad Shah Massoud. But it may be very difficult for it to find external support, without which it is nearly impossible to take on the Taliban.

Therefore, China and Russia, for now have chosen pragmatism over lofty ideals and have decided to do business with the Taliban.