US Secretary of State Blinken to visit India next week 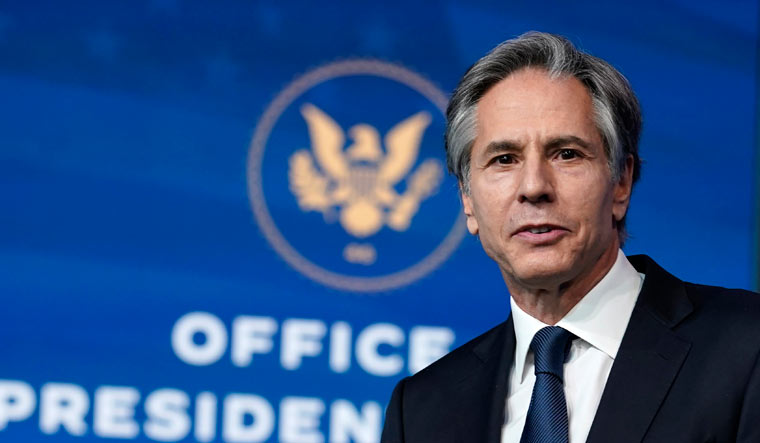 File photo of US Secretary of State Antony Blinken | AP

US Secretary of State Antony J. Blinken will be visiting India next week on July 27 and 28, the Ministry of External Affairs has announced. This is Secretary Blinken's first visit to India after assuming charge as U.S. Secretary of State.

On 28 July, he will meet the External Affairs Minister S. Jaishankar and the National Security Advisor Ajit Doval.

“Secretary Blinken's visit is an opportunity to continue the high-level bilateral dialogue and bolster the India-US global strategic partnership,” the MEA said. “Both sides will review the robust and multifaceted India-US bilateral relations, and potential for consolidating them further,” it added.

“Discussions will focus on regional and global issues of mutual interest – including recovery from the COVID-19 pandemic, the Indo-Pacific region, Afghanistan and cooperation in the UN,” the MEA said.

The discussions on Afghanistan come as the country grapples with a resurgent Taliban, emboldened by the US withdrawal. With US President Joe Biden expecting all troops home by the 20th anniversary of the September 11 attacks, the Afghan government has lost a powerful ally in its war against the Taliban. The Taliban have captured many districts in the country from the government, and by some estimates control over half of Afghanistan’s districts.

While the bulk of US forces have already left, its air power continues to remain a factor, with the US announced it had conducted air strikes on the Taliban on Thursday. However, Biden has made it clear that the US did not enter Afghanistan with the mission of nation building, and said Afghan leaders have to come together and “drive toward a future.”

India’s close ties with the Afghan government, and inversely its hostile relations with Pakistan (which has tacitly supported the Taliban) have made New Delhi a key player in Afghanistan for both Kabul and Washington.

Blinken may also discuss plans for an in-person summit of the Quad group of countries—India, Australia, Japan and the US—which is often seen as a counter to China’s influence in the Indo-Pacific.

Following Blinken’s visit to India, he is due to go to Kuwait.