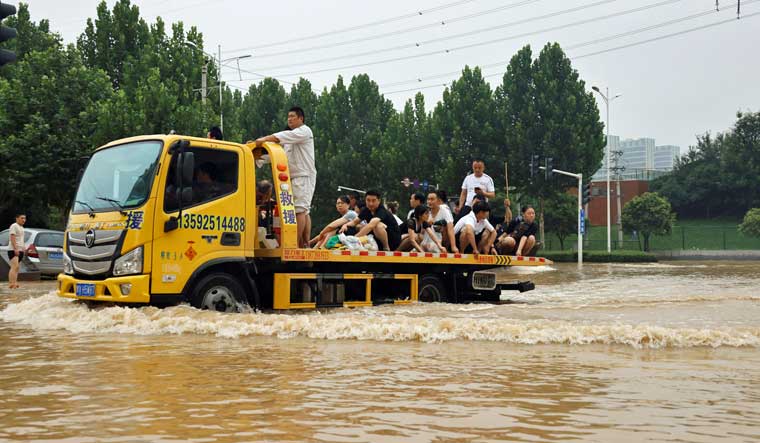 People ride on the back of a truck as they make their way through floodwaters following heavy rainfall in Zhengzhou, Henan province | Reuters

The death toll from the rain-triggered unprecedented floods in central China has risen to 51 with the official estimate of losses totalling about $10 billion, the state media reported on Friday.

The torrential rains, the heaviest in 1,000 years, have affected about three million people in Henan province and a total of 376,000 local residents have been relocated to safe places, the provincial emergency management department said.

The death toll caused by downpours and floods has increased to 51 in the Henan provincial capital of Zhengzhou, the state-run China Daily quoted local authorities as saying.

The direct economic losses have gone up to 65.5 billion yuan ($10 billion), it said.

As Zhengzhou city of 12 million people limped back to normalcy, rescuers are assisting thousands of people caught in the floodwaters. On Thursday, officials raced to evacuate patients as hospitals were flooded by rainstorms. The patients were shifted to hospitals that escaped the flood fury.

Zhengzhou, meanwhile, downgraded its emergency response level as it continued to clean up after this week's devastating floods, but other parts of Henan province were bracing for more heavy rainfall, the Hong Kong-based South China Morning Post reported.

Zhengzhou was hit by several days of heavy rainfall, causing floods of an intensity not seen in decades.

Donation counters were set up around the city to distribute essential supplies after the panic-stricken residents bought supplies during the first days of the flood.

Meanwhile, fire crews have been touring the surrounding villages to help residents who have been injured or are trapped and were working throughout the day to drain the flooded roads.

Streets were turned into rushing rivers, washing away people and vehicles and apartments. Hundreds of cars washed away in floods have piled up in different parts of the city.