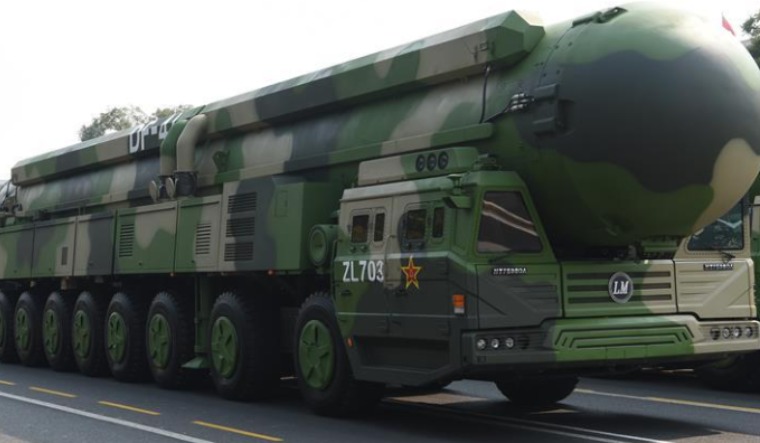 Dr Jeffrey Lewis, a renowned expert on non-proliferation, warned on Wednesday the US and China could be stumbling into a new arms race.

Lewis made the comments to The Washington Post after researchers at MIIS found evidence of China building over 100 new silos for launching intercontinental ballistic missiles (ICBMs) in a desert region near the north-western city of Yumen. A Pentagon report last year claimed China was estimated to have around 100 ICBMs in service and the US believed this number would rise in the next five years.

Silos were the earliest means of housing and launching long-range nuclear missiles, with crews based at the launch site. Silos were ubiquitous before road- and rail-mobile missiles and submarine-launched weapons were introduced. While vulnerable to pre-emptive strikes, silo-launched weapons have been considered cheaper to operate, which is why the US and Russia continue to operate them.

Lewis wrote in Foreign Policy that he and an associate found 119 new silos at the site near Yumen. Lewis exclaimed in Foreign Policy, "Given that China has a force of only about 100 ICBMs, seeing another 100 or so silos under construction was jaw-dropping. The site itself is enormous—more than 700 square miles. There are the silos. There are also underground bunkers being built that may function as launch centers, with trenches carrying cables to 10 different silo launchers. There are roads and a small military base. The scale of construction is startling, and China broke ground on the site only a few months ago, in February."

Lewis speculated the new silos could be used to house the DF-41 ICBM, which can target the continental US, given its range of nearly 15,000km.

Interestingly, Lewis emphasised that the presence of a large number of silos did not mean all of them would house new missiles. He explained the US used a similar strategy in the Cold War by transferring missiles across multiple silos to make it difficult for Soviet planners to predict which location had weapons. Lewis noted China had built 'decoy' silos in the past to confuse potential enemies.

Lewis opined in Foreign Policy, "So while it might seem that 120 silos means 120 missiles, it could very easily be 12. We just don’t know. And even if China were to deploy only a handful of missiles, its forces could over time grow into the silos. Yet whether the number is 12 or 120, this is an alarming development. As I have written before, we are in the midst of an arms race with Russia and China.."

Lewis explained to The Washington Post "China is expanding its nuclear forces in part to maintain a deterrent that can survive a U.S. first strike in sufficient numbers to defeat U.S. missile defenses.” Lewis noted "sudden appearance of so many new launch sites could increase pressure on U.S. officials to speed up efforts to modernize the U.S. arsenal." He told The Washington Post, “We’re stumbling into an arms race that is largely driven by U.S. investments and missile defense.”