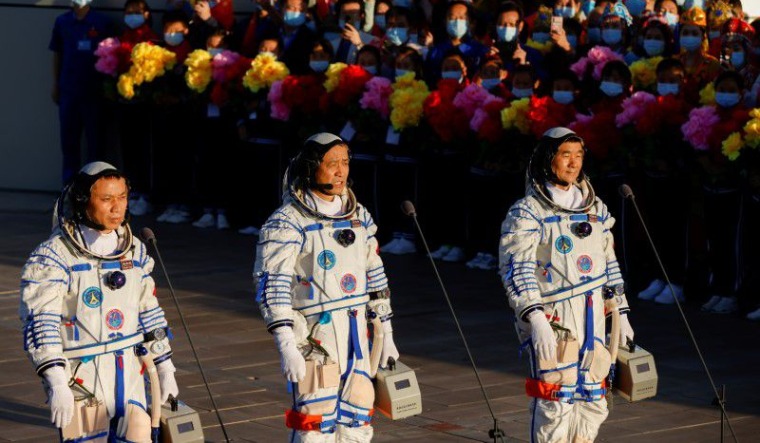 China on Thursday morning successfully launched a rocket carrying a three-man crew for the first mission on its new space station.

The three astronauts were travelling on the Shenzhou-12 spacecraft, which was launched by a Long March-2F Y12 rocket from the Jiuquan launch centre, on the edge of the Gobi desert, on Thursday morning.

The three astronauts will be onboard the Tianhe space station for a three-month stay. They will "carry out experiments, test equipment, conduct maintenance and prepare the station for receiving two additional modules next year," Associated Press reported.

The crew consists of veteran astronauts Nie Haisheng (who had been in space in October 2005 and June 2013) and Liu Boming (who participated in China's first spacewalk in 2008 with another astronaut) and new astronaut Tang Hongbo.

"The Shenzhou-12 is made up of three sections—an orbiter module, a return module and a propelling module, and has 14 sub-systems onboard... it will not only ferry three astronauts to the orbiting Tianhe core module, but is also expected to carry them home to Earth in approximately 90 days," the Global Times reported.

China has also kept another Shenzhou-12 craft ready for launch within eight-and-half days if any rescue mission was required.

Work on assembling the space station began this year. “Shenzhou-12 is the third of 11 missions—four of which will be crewed—needed to complete China's first full-fledged space station. Construction began in April with the launch of Tianhe, the first and largest of three modules,” Reuters reported.

Since 2003, China has launched six manned space missions, with 11 astronauts going to space.

In September, a cargo craft with equipment for the space station will be launched, while a second manned mission, Shenzhou-13, is scheduled to blast off in October.