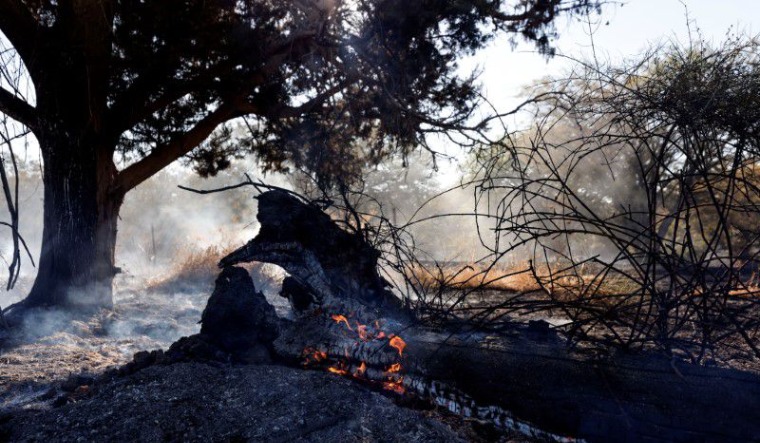 Israeli aircraft carried out airstrikes on multiple targets in the Gaza Strip late on Tuesday night. The attacks were the first since Israel and Palestinian militant group Hamas agreed to a ceasefire on May 21 to end an 11-day war.

The airstrikes were carried out in retaliation for incendiary balloons launched from Gaza that caused around 20 fires in southern Israel. Earlier on Tuesday, Palestinian media had published photographs of militants preparing to launch the balloons from Gaza.

"The IDF (Israel Defense Forces) is prepared for all scenarios, including the resumption of hostilities, in the face of continued terrorist acts from the Gaza Strip," the IDF Spokesperson's Unit was quoted as saying by The Jerusalem Post. Israeli Prime Minister Naftali Bennett had warned in the past that incendiary balloons would be treated like rockets.

The new spiral of violence was attributed to a march by Israeli ultra-nationalists in East Jerusalem on Tuesday. Palestinians had considered the march as a provocation. The march commemorates Israel's capture of East Jerusalem in the Six-Day War of 1967. According to reports, the protesters shouted anti-Arab slogans. Following the march, Palestinians clashed with Israeli soldiers on the borders of Gaza.

Hamas responded defiantly to the Israeli airstrikes, calling it "a failed attempt to stop our people’s solidarity and resistance with the Holy City [Jerusalem], and to cover up the unprecedented state of confusion for the Zionist establishment in organizing the so-called 'Flag March.'"

Ahead of the march in Jerusalem, Israel had rerouted flights from Ben-Gurion Airport and also placed its Iron Dome rocket defence batteries on alert.

"The courageous stances of the Palestinian resistance, and its decisive decisions that forced the Israeli occupation to change the path of the so-called march of flags away from the blessed Al-Aqsa Mosque, change the path of civil aviation, and intensify the deployment of the Iron Dome, confirm the achievement of the deterrence equation it imposed in the Battle of Saif al-Quds, and its success in imposing new rules of engagement on the enemy. The valiant resistance will remain the protective shield for our people, and the behaviour of the Israeli occupation on the ground will determine the course and nature of dealing with it," Hamas was quoted as saying in a statement by The Jerusalem Post.