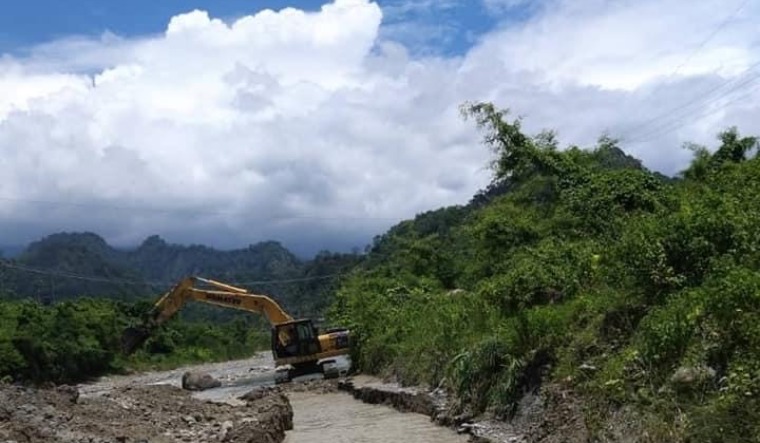 Representational image: An irrigation channel that flows from Bhutan to Assam | Facebook account of Bhutan Ministry of Foreign Affairs

A new report has claimed that China has built a village 8km within Bhutan’s territory, as part of its move to expand and develop its infrastructure in the border regions of Tibet.

The report, published in Foreign Policy, says China has been gradually and stealthily invading Bhutan for years, following a 2017 drive flagged off by President Xi Jinping to fortify the Tibetan borderlands.

The new village is located in Bhutan’s Lhuntse district, but has been marked as being part of Lhodrak in the Tibetan Administrative Region (TAR) by China. The report says China is building three villages with “66 miles of new roads, a small hydro-power station, two Communist Party administrative centres, a communications base, disaster relief warehouse, five military or police outposts, and what are believed to be a major signals tower, a satellite receiving station, a military base, and up to six security sites and outposts.”

The report suggests that China does not actually need the land it is settling in Bhutan but rather wants to use it as leverage for other territories in Bhutan that may be advantageous for it against India. A New York Times report in February noted that China was following the same playbook it used in the South China Sea in Bhutna, by unilaterally changing the facts on the ground.

China reportedly claims roughly 12 per cent of Bhutan’s territory, with no mutual understanding between the two nations on what constitutes the border.

In April, China’s foreign ministry said both Beijing and Thimphu had agreed to continue to maintain peace and stability in the border areas before the final settlement of the China-Bhutan boundary issues, following the 10th China-Bhutan expert group meeting on boundary issues in Kunming.

On Friday, China released a white paper saying it was ramping up efforts to develop the infrastructure in remote villages located along Tibet's border with India, Bhutan and Nepal.

The inhabitants of the contiguous areas experience harsh living and working conditions and a high incidence of poverty. Governments at all levels have been making constant efforts to develop border areas and improve people's lives, it said.

The document said that under the guidance of the ruling Communist Party, financial allocation has been increasing year by year for border development in Tibet.

The development of China's border areas by establishing new villages with added emphasis on security has been accorded a priority since President Xi Jinping came to power in 2012.

The India-China border dispute covers the 3,488-km-long Line of Actual Control (LAC) of which 1,126 km is located in Arunachal Pradesh. China claims Arunachal Pradesh as South Tibet, which India has firmly rejected.

China also shares an over 477-km-long border with Bhutan which is yet to be delineated and 1,389 kms of border with Nepal.

The border village development was highlighted when President Xi wrote a letter to a Tibetan herdsman family in Lhunze County close to Arunachal Pradesh in 2017 asking them to set down roots to safeguard the Chinese territory and focus on developing their hometown.

"Without the peace in the territory, there will be no peaceful lives for the millions of families," Xi wrote in his much-publicised letter focussing on border development.

In 2017, the Plan of Tibet Autonomous Region on the Construction of Villages of Moderate Prosperity in Border Areas (2017-2020) was released, designed to ensure better access to housing, water, electricity, roads, communications and the internet, to improve education, technology, culture, healthcare and social security in border villages, and to boost industries in border areas.

The Tibet Autonomous Region also has built a comprehensive transport network composed of highways, railways, air routes and pipelines since its peaceful liberation in 1951 it said.

The region has built 118,800 km of highways over the decades, said the document.

Now, 94 per cent of towns and 76 per cent of administrative villages in the region have direct access to asphalt and concrete roads, it said.

Tibet last year has announced $ 2.09 billion plan to build three new airports and the expansion of the Lhasa Gonggar Airport.

The three new airports will be built in Lhunze, Tingri and Burang counties.

China has already built airports at Bamda in Qamdo, Mainling in Nyingchi, Xigaze, and in Ngari. Tibet now has 140 domestic and international air routes in operation, reaching 66 cities, the white paper said.