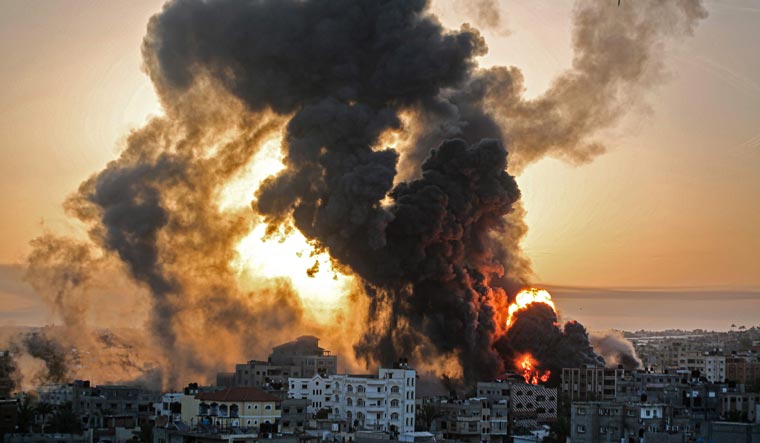 As clashes between Israel and Hamas forces within Palestine reach levels not seen since the 2014 war, the United States is set to supply $735 million of smart guided munitions and weapons to Tel Aviv, according to a Washington Post report.

Congress had been notified of the proposed sale on May 5, a day before Palestinian protests erupted in response to Israel's forced evictions of Palestinians from East Jerusalem. A day later, Israeli police stormed the Al-Aqsa Mosque, leaving hundreds injured and inflaming tensions.

A week later, hostilities broke out after Hamas mounted an intensive rocket attack campaign against Israeli cities from the Gaza Strip. Israel, in turn, responded with airstrikes that have killed over 200 Palestinians.

The weapons the US seeks to sell Israel reportedly include the Joint Direct Attack Munitions (JDAM), which can convert a regular bomb into a precision-guided munition capable of targeted strikes. In 2018, the US Department of Defence approved a $1.8 billion deal for both JDAM kits and the bombs they attach to.

Israel says its precision-guided strikes avoid hitting civilians, but also says Hamas uses civilians as human shields, justifying its strikes on buildings including one that housed media outlets Associated Press and Al Jazeera, on the grounds that the alleged presence of Hamas military intelligence officers in the building made it a military target.

According to the report, Biden's administration is only required to inform Congress of such sales, although official notification generally comes only after Congress has informally agreed. Once the formal notification is made, lawmakers have 15 days to object with a nonbinding resolution of disapproval. While some Democratic House members have opposed US support for Israel in the conflict, Congress as a whole is likely to support Tel Aviv.

While the US stance has been that Israel has the “right to defend” itself against the Hamas rocket attacks, it has also offered its support should both parties seek a ceasefire. However, while US aid to Israel is often military (with about $3.8 billion of support annually, most of which goes towards military equipment from US companies), it also provides humanitarian support for Palestine. On April 7, the Biden administration announced it would provide $235 million of aid to Palestinians that had been cut by former US President Donald Trump.

While the US has often sided with Israel as its core ally in the region, wilding a significant chunk of its veto votes over the last 75 years in favour is Tel Aviv, it was under Trump’s administration that it made the boldest move in support of Israel, with the US formally recognising Jerusalem as the capital of Israel.

While Hamas has fired thousands of rockets towards Israel, many have been intercepted by the country's Iron Dome air defence system, keeping Israeli casualties to a minimum.