'The world will know less about what is happening in Gaza because of today’: AP, Al-Jazeera respond to Israeli airstrike

The IDF says Hamas made the building a 'lawful military target' 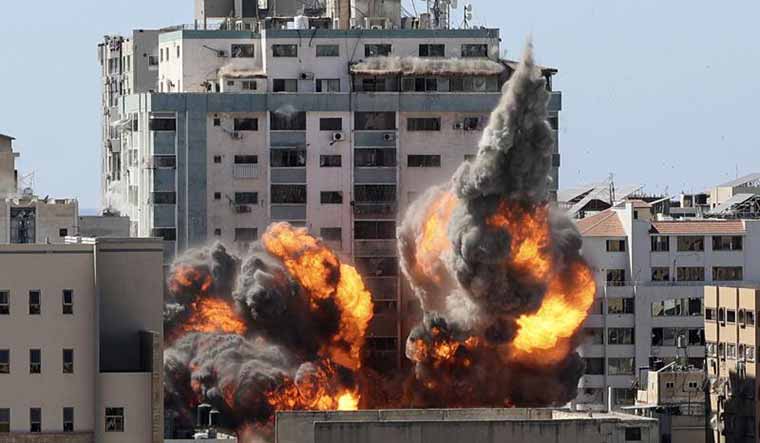 Following an Israeli airstrike on a Gaza building hosting several media organisations, amid ongoing hostilities between Israel and Palestine, the Associated Press and Al-Jazeera have both released statements condemning the incident.

“We are shocked and horrified that the Israeli military would target and destroy the building housing AP's bureau and other news organizations in Gaza. They have long known the location of our bureau and knew journalists were there,” AP President and CEO Gary Pruitt said in a statement.

AP VIDEO: An Israeli airstrike destroyed a high-rise building in Gaza City that housed offices of The Associated Press and other media. https://t.co/P4zeHsCrAg

The Israeli Defence Force (IDF) said they informed the buildings’ residents before they carried out their strike.

“We are seeking information from the Israeli government and are engaged with the US State Department to try to learn more,” Pruitt said, adding, “This is an incredibly disturbing development. We narrowly avoided a terrible loss of life. A dozen AP journalists and freelancers were inside the building and thankfully we were able to evacuate them in time.”

“The world will know less about what is happening in Gaza because of what happened today,” he said.

Al-Jazeera condemned the strike, calling it a “clear act to stop journalists from conducting their sacred duty to inform the world and report events on the ground.”

“Residents and occupants of al-Jalaa building, which housed Al Jazeera’s office along with leading international media outlets, such as The Associated Press and Middle East Eye, were informed by the Israeli army via a phone call that they had less than one hour to vacate the building,” Al-Jazeera said.

The Qatar-based media organisation's acting director general said the airstrike could be considered a war crime.

Israel has targeted several high-rise buildings in the Gaza Strip in the last few days, as the tensions between it and Palestinian outfits like Hamas escalated to levels not seen since the 2014 war. With hundreds of rocket attacks targeting Israeli cities that have been launched from the strip, Israel has responded with air strikes, that have so far killed 126 and left over 950 injured according to AFP estimates.

The IDF justified the strikes, saying it was due to the building being used by Hamas military officials who, by using a civilian building for such purposes, made it a “lawful” military target. “After providing advance warning to civilians and time to evacuate, IDF fighter jets struck a multi-story building containing Hamas military intelligence assets,” the IDF tweeted.

“The building contained civilian media offices, which Hamas hides behind and deliberately uses as human shields,” it said.

In a thread on the IDF’s strikes on high-rise buildings in Gaza, which included the 14-storey al-Shorouk building that was located across Gaza’s biggest mall, the IDF said it provided residents enough time to evacuate the buildings.

“We called the building's residents and warned them to leave. We sent SMS messages. We dropped ‘roof knocker’ bombs; they make loud noises and hit only the roof. We provided sufficient time to evacuate.”

“When Hamas places military assets inside such a building, it becomes a lawful military target. This is clear international law,” the IDF said.