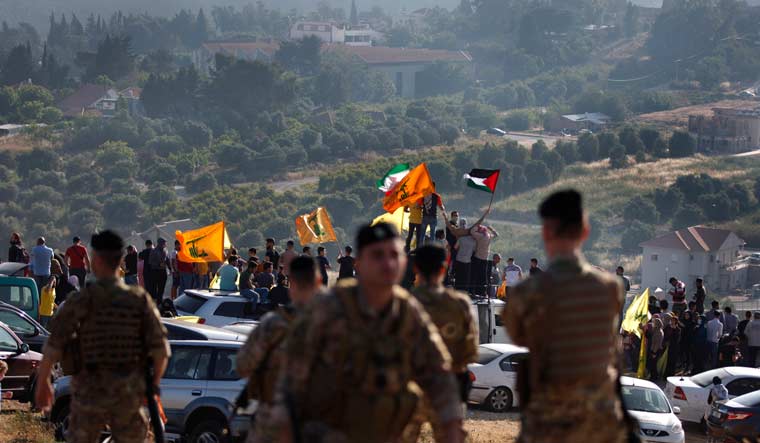 Hezbollah supporters wave their group, Iranian and Palestinian flags, during a protest in solidarity with Palestinians amid an escalating Israeli military campaign in Gaza, on the Lebanese-Israeli border in front of the Israeli settlement of Metula, background, near the southern village of Kafr Kila, Lebanon, Friday, May 14, 2021 | AP

A Lebanese police official and the country's official news agency say a Lebanese protester who was hit when Israeli troops fired shots at the Lebanese-Israeli border has died of his wounds.

The official said the 31-year-old protester died on Friday, a few hours after he was shot at the border where Palestinian and Lebanese youth had gathered as part of a rally against the Israeli military campaign in Gaza.

A small group of them later crossed the border into Israel, triggering the shooting.

The Israeli military says troops fired warning shots toward the group after they sabotaged the fence and crossed over briefly.

There was no immediate comment from Lebanese officials or the military on the incident.

The police official spoke on condition of anonymity in line with regulations.