Debris of Chinese rocket splash down west of Maldives

Most of the debris was burnt up in the atmosphere, China's space agency said 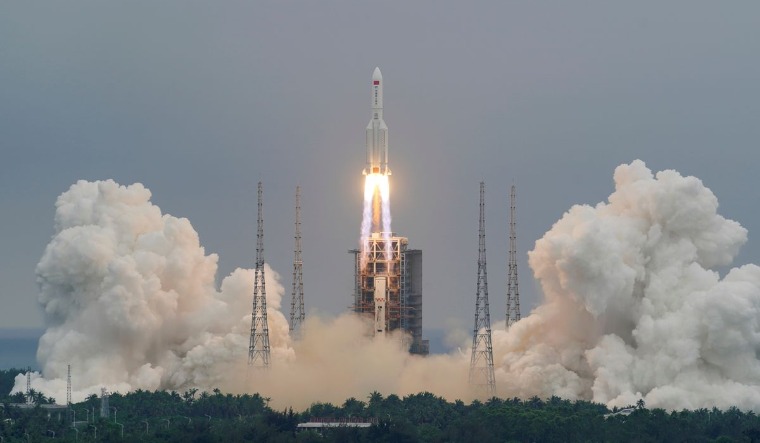 The Long March 5B lifting off | Reuters

The Chinese government announced that remnants of the country's biggest rocket had landed in the Indian Ocean early on Sunday, ending days of speculation where the debris would land.

Reuters reported the China Manned Space Engineering Office as stating "Parts of the Long March 5B re-entered the atmosphere at 10:24 a.m. Beijing time (0224 GMT) and landed at a location with the coordinates of longitude 72.47 degrees east and latitude 2.65 degrees north..."

The coordinates given by the Chinese government mean the rocket debris impacted west of the Maldives. "Most of the debris was burnt up in the atmosphere, the China Manned Space Engineering Office said," Reuters reported.

There had been worry on where remnants of the Long March 5B, on it second mission, would land after it blasted off from Hainan Island on April 29. The worry was fuelled by the precedent set by the spacecraft's first mission in May 2020: Debris fell over the Ivory Coast, damaging several buildings, though no injuries were reported.

"During the rocket's flight, Harvard-based astrophysicist Jonathan McDowell told Reuters that the potential debris zone could have been as far north as New York, Madrid or Beijing, and as far south as southern Chile and Wellington, New Zealand," Reuters reported.

Chinese officials had insisted the debris from the Long March 5B would not cause damage.

Chinese Foreign Ministry spokesman Wang Wenbin had told a media briefing in Beijing on Friday that China would provide timely updates on the rocket's re-entry.

“It is common practice across the world for upper stages of rockets to burn up while re-entering the atmosphere. China is closely following the upper stage's re-entry into the atmosphere... To my knowledge, the upper stage of this rocket has been deactivated, which means that most of its parts will burn up upon re-entry, making the likelihood of damage to aviation or ground facilities and activities extremely low,” he said.