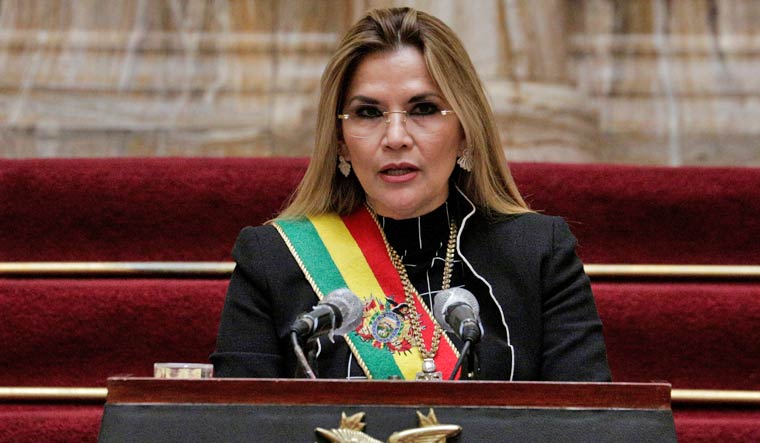 Accused of sedition, terrorism, and being part of a “coup” that ousted former president Evo Morales, Jeanine Añez, the former interim president who ruled Bolivia for one year leading to new elections, was arrested in her home region of Beni at 1:35 in the morning after police surrounded her residence some 12 hours earlier and launched a citywide manhunt.

An arrest warrant was issued earlier for Añez and five of her government’s ministers along with seven former police and military commanders. The events follow new accusations and her recent defeat in candidacy for governor of the Amazonian region of Beni, the country’s largest geographical jurisdiction.

The government announced her arrest but provided little additional information and has not made much of a public case for its action other than the listing of the charges, prompting accusations of political persecution.

“I denounce to Bolivia and the world, that in an act of abuse and political persecution the MAS (Movement toward Socialism) government has ordered my arrest. It accuses me of having participated in a coup that never happened. My prayers for Bolivia and for all Bolvians,” tweeted Añez shortly after her arrest as she was being transferred to the capital, La Paz.

Añez assumed the presidency in October 2019 as the Constitutional next-in-line after Morales, his vice-president, and the presidents of the upper and lower houses of congress resigned following a countrywide revolt that questioned his claim to have won the elections.

She represented the opposite spectrum of Morales’s left-wing political persona, with a heavily religious tinge that started with raised Bibles as she took office and right-wing politicians appointed to her cabinet. She also represented a cultural divide between the Andean and Amazonian regions of Bolivia, replacing the prominence of the wiphala, a 7-colour Andean flag, with a Patuju flag that represents the indigenous peoples of the Bolivian lowlands. That set up a dynamic of cultural, geographical, and political division.

At first, she made it clear she understood her constitutional role as a caretaker whose role was to ensure the calling and carrying out of new elections—a chore that was delayed by the pandemic, and that at one point had her running as a candidate for the presidency. Eventually, elections were held and they resulted in a lopsided victory by Luis Arce, the candidate of Morales’s political party, the former Minister of Economy.

Añez was Bolivia’s 66th president and the second woman to hold the high office.

Her handling of unrest and ongoing violence by those still supporting Morales was criticized by the opposition as being heavy-handed, resulting in as many as 30 deaths. While she was still in office, the outgoing parliament approved a motion recommending that she and her ministers face justice for their responsibility over the unrest on the “massacres of Senkata, Sacaba and Yapacani,” recommending a judgment of responsibility for genocide and other offences.”

A government investigation into the events it characterizes as a “coup” backed by the CIA and supported by economic interests in the US and Europe has taken new momentum recently with charges that the UK supported Añez to gain access to the country’s rich lithium reserves.

In the noise of investigations and new accusations, and in the wake of the flight abroad of two of Añez’s key ministers in charge of the Ministries of Government and Defense as the new government was sworn in, Bolivia’s courts suddenly considered her a “flight risk,” and ordered her arrest along with her most senior Ministers. Notably, after leaving office Añez did not take flight but stayed and ran a campaign for governor of her home region in the elections held earlier this month.

The former commanders of police, Col. Yuri Calderon, and of the country’s military, Gen. Williams Kaliman, were also part of the order of arrest and are being sought by the country’s police. It was their support that tipped the power balance amid the 2019 post-election revolutionary uprising. When Kaliman withdrew his support, Morales resigned and then left the country for Mexico, fearing for his safety.

Demonstrations and attempts to retake control by Morales’s MAS supporters resulted in violence and deaths as the military was ordered in to take control.

Last month, the new MAS-dominated congress voted to give amnesty to those prosecuted for acts of violence by Añez’s government during the chaos that followed Morales’s resignation.

The new Minister of Government Carlos Eduardo del Castillo informed of the former president’s arrest via Twitter, “I inform the Bolivian people that Mrs. Jeanine Añez has already been apprehended and is currently in the hands of the police,” congratulating the police for their “great work” in the “historic task of giving justice” to the Bolivian people.

Complaining of the order by the public prosecutor’s office Añez tweeted before her arrest, “The political persecution has begun,” adding that the move signified a “return to the styles of dictatorship.”