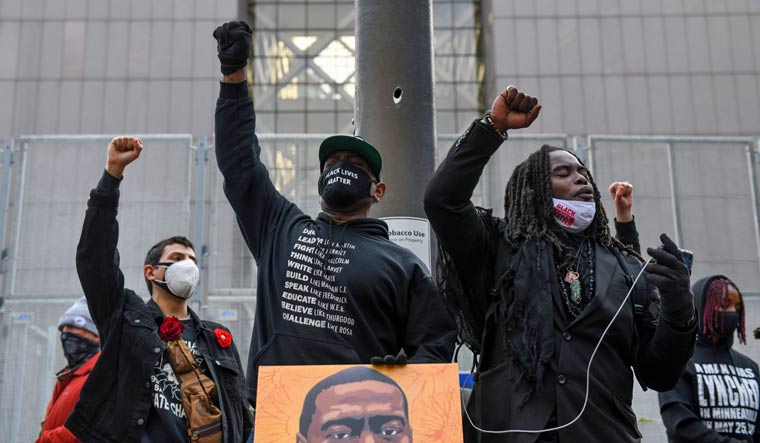 Protesters raise their fists and chant after the "I Can't Breathe" Silent March for Justice a day before jury selection is scheduled to begin for the trial of Derek Chauvin, the former Minneapolis policeman accused of killing George Floyd | Reuters

The fate of a former Minneapolis police officer, Derek Chauvin who pressed his knee into the neck of Black man George Floyd as Floyd said he couldn't breathe will be decided by a 12-strong jury. The jurors will be picked by residents of Hennepin County after extensive grilling about their views on police and the justice system.

Chauvin faces second-degree murder and second-degree manslaughter charges. The jury selection process is expected to take three weeks. They will be selected on basis of their familiarity with the George Floyd case, their news habits and so on.

Opening arguments of Chauvin's trial is expected to begin on March 29. Ahead of jurors being chosen for the trial, on Saturday, activist Toshira Garraway led families who've lost a dear one to police violence on a march around the Minnesota governor's mansion.

The death anniversary of George Floyd is approaching. Floyd was declared dead on May 25, after Chauvin, a former police officer pressed his knee against Floyd's neck and continued to do so even after Floyd went limp. Floyd's death sparked anti-racism protests across the country.

The prospective jurors will also be asked how many times they saw the video of Floyd being choked. The selected jurors will be escorted to the courthouse daily and sequestered during deliberations. Seating at the courtroom will be limited to maintain social-distancing during the coronavirus pandemic.