Warm weather not expected until the weekend, govt working to restore power 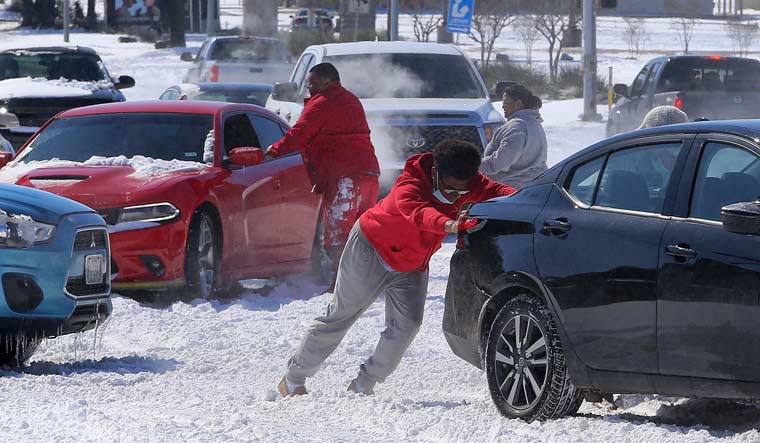 People push a car free after spinning out in the snow Monday, Feb. 15, 2021 in Waco, Texas. A winter storm that brought snow, ice and plunging temperatures across the southern Plains and caused a power emergency in Texas stretched its frigid fingers down to the Gulf Coast | Jerry Larson/Waco Tribune-Herald via AP

Texas is under a state winter warning for the first time in its history. As of Tuesday, the entire state reels under a winter storm and temperatures for which its residents and government are not prepared.

There were two million homes without electricity in Texas as of Monday night. Some 200,000 people in the San Antonio area went into the night in the dark and without heat after an entire day without electricity or water. Amid temperatures that dropped to -16C in parts of Texas, people spent the night outside in their cars, trying to stay warm.

By Tuesday morning, nearly four million homes and businesses were without power across the state, including more than half a million in the Dallas/Fort Worth metro area, where temperatures dipped well below zero.

Across the US, more than 170 million people were under a wintry weather warning, but Texas has been hit especially hard because of its size and because the wind turbines used to generate electricity for the state froze under extremely low temperatures, with the freezing rain knocking out more than half of the state’s electricity production—this, at a time when demand increased across the massive state due to the collective need to keep warm.

Powerlines downed due to ice added to the power issues already stressing the state, which was forced to institute rolling blackouts to prevent people from freezing to death while the electric utilities worked to thaw out the wind turbines.

Residents in San Antonio woke up on Monday to homes without electricity and warnings to stay home due to icy conditions on the roads. Grocery stores were closed, as were most services including gas stations. Uber and delivery services announced they would not be operating due to dangerous conditions, restaurants closed and hotels filled up.

The corporation that manages the public grid, the Electric Reliability Council of Texas, first announced Monday that rolling blackouts would last just 20-45 minutes. But in some parts, that soon became 4–6 hours. In other parts, homes have been without power or water for more than 24 hours.

Some in San Antonio have seen flickers of light, while others were without power all day on Monday and going into the night.

The counties in the area reported that around 383,000 area residents had their electricity disrupted going into Monday night. More than 300,00 were reported without power Tuesday morning. There is a hard freeze warning for the area. Two out of three customers in the state were affected by blackouts.

“Several of my children have had no power all day and night and now night again,” said Texan Demetra JeffersonWysinger Monday night. “It is a pretty serious situation,” posted a Houston resident. “There is a danger of people freezing,” warned a radio station in the San Antonio area.

“It is time to take refuge,” were words for the weary from Houston’s Harris County judge Lina Hidalgo late Monday night. “The window to prepare for this historic storm has closed and the time has come to take refuge.”

Because of its relatively mild winters, many Texans do not have heavy sweaters or winter coats. Now, warming centres are being set up, while most events stand cancelled and stores are closed due to difficult driving conditions in an area where people are not used to driving on icy roads, and the authorities do not have the resources to salt or sand the roads. The region is generally unprepared for extreme cold weather and ice. Tuesday, the National Guard was being sent in to help and the governor has issued a state of alert in all Texas counties.

Emergency declarations were also issued in Alabama, Oregon, Oklahoma, Kansas, Kentucky, and Mississippi. In Texas, however, much of this state, including Dallas, San Antonio, Austin, Houston, Corpus Christi, and Brownsville, is under a severe winter storm warning, with very dangerous travel conditions, impassable roads, and impossible conditions, say authorities.

Snow has fallen in a large part of the state, including more than 20 cm in San Angelo, the most snowfall ever recorded there. Ten centimetres fell in Dallas and the southernmost city of Brownsville recorded snow for only the third time in its history.

Houston Airports Hobby and Bush InterContinental were closed due to snow and ice. And, in a state that has been pushing for the reopening of schools despite pandemic fears, schools and universities throughout the state cancelled classes until Wednesday. The state of Texas shut down almost completely.

It was colder in Texas than it was in Anchorage, Alaska Tuesday morning, with another wintry mix expected in later Tuesday. Sub-zero temperatures have reached as far down as the Gulf Coast. State authorities have warned that residents should expect prolonged outages are expected all day Tuesday.

“We ask that you wear multiple layers, stick towel and blankets around doors and windows, keep doors closed, and stay warm,” said a robocall to Texans.

Forecasters do not expect warmer temperatures until the weekend.