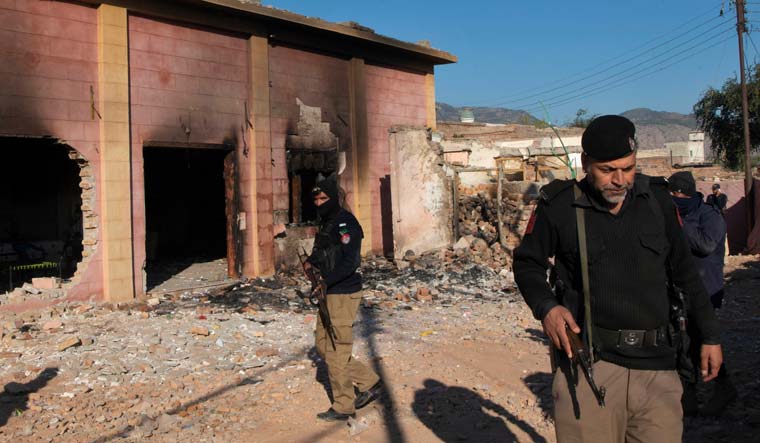 Security personnel at the site of the vandalised temple | AP

Pakistan's Supreme Court has ordered the Khyber-Pakhtunkhwa government to immediately start rebuilding a century-old Hindu temple that was vandalised by a mob in the province, and submit a timeline for its completion.

The attack on the temple in Terri village in Khyber Pakhtunkhwa's Karak district by members of radical Jamiat Ulema-e-Islam party (Fazal ur Rehman group) in December drew strong condemnation from human rights activists and the minority Hindu community leaders, prompting the apex court to order its reconstruction last month.

On Monday, a three-judge apex court bench, headed by Chief Justice Gulzar Ahmed, heard the suo motu case regarding the burning of the temple, The Express Tribune reported.

During the proceedings, Justice Gulzar said, "Inform us if any recovery or arrest has been made on the temple issue in Khyber-Pakhtunkhwa?"

In January, the apex court had ordered the provincial government to recover the money for the construction of the temple from those who had burnt it.

Evacuee Trust Property Board lawyer Ikram Chaudhry apprised the bench that no recovery has been made so far on the temple issue, the paper said.

"The government had approved Rs 30.41 million for the reconstruction of the temple," Chaudhry informed the bench.

Justice Ijazul Ahsan said that the court had ordered to recover the money from those who burnt the temple so that they could learn a lesson.

"Evacuee Trust Property Board chairman should be summoned and a detailed report containing all the progress made so far be submitted in court," Justice Gulzar said.

The Evacuee Trust Property Board is a statutory board that manages religious properties and shrines of Hindus and Sikhs who had migrated to India following the partition.

Ramesh Kumar, head of the Hindu Council and a member of the National Assembly, said that the Chief Minister Mahmood Khan had said that the Karak area was sensitive and that the reconstruction of the temple in Karak should be done by the Hindu community.

"The KP government will later reimburse the cost of building the temple."

The KP additional advocate general said that according to the law, tender should be issued for the reconstruction of the temple.

Justice Gulzar directed authorities to ensure that the Prahladpuri temple in Multan is prepared for the Holi festival falling on March 28.

The chief justice directed the Evacuee Trust Property Board chairman, Punjab IG and chief secretary to ensure security at the Multan shrine.

The bench summoned the Evacuee Trust Property Board chairman on the next hearing and adjourned the suo motu case till next Monday.

The majority of Pakistan's Hindu population is settled in Sindh province where they share culture, traditions and language with Muslim residents. They often complain of harassment by extremists.