Where does QAnon go after realising it has been duped? An inside look 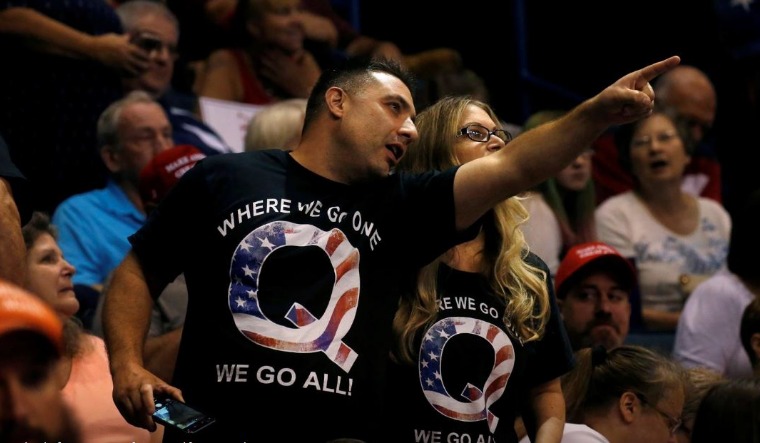 There were 17 flags behind Donald Trump as he gave his last speech to the few dozen people gathered to say goodbye to him at Andrews Joint Base in Maryland the morning of Joe Biden’s inauguration as US president. The 17th letter of the alphabet is “Q”. This left QAnon fans reassured that Trump would declare martial law from Air Force One and retain power, arresting Biden, Vice President Kamala Harris and the lot of them on the steps of the Capitol they stormed 2 weeks ago.

It was a sign that everything was in order to many QAnon followers who waited for the day to vindicate their beliefs and change the world.

It would be a matter of hours before everything came together. There would be “victory”. Trump would be sworn in for a second term.

Panic set in as Harris and then Biden were sworn in and the imagined military support for their “God-protected, Trump directed” power grab did not materialise. As Trump was perhaps settling in by the pool at Mar-a-Lago, QAnon message boards were beginning to realise they might have been conned.

“I don’t think this is supposed to happen” read a post on a QAnon forum. “How long does it take the fed to run up the stairs and arrest him?”

They expected the secret anti-Deep State Trump feds to stop the inaugural and put Biden under arrest.

For weeks since the November 3 election, QAnon had been frothing about the fantasy of last-minute moves: Trump imposing martial law; utilising the Emergency Alert System while aboard Air Force One; arresting Biden, Harris, Speaker Nancy Pelosi and not-sufficiently-loyal Republicans and holding public executions. With different degrees of fantastic thinking, that was the plan to give Trump a second term.

“Trust the plan,” has been the years-long Q mantra for those who believed that the world was being run by a cabal of Satan-worshiping, child-eating paedophile cannibal Democrats and other world leaders who had nothing but Trump to fear, the man who was heroically behind-the-scenes fighting for the children and would ultimately defeat the devil-devoted Democrats with the help of God.

Republican politicians have been riding the wave of popularity of the conspiracy theory while QAnonners have been lusting for a bloody resolution and an eventual Trump dictatorship, egged on by Republicans and Trump himself, with a wink and nod, as is his style.

“Mr. President @realDonaldTrump — we are with you in #Arizona. We are working every avenue to stop this coup & to stop our Republic from crumbing,” tweeted Arizona Republican Party Chairwoman Kelli Ward in December, pushing the #crosstherubicon hashtag, arguably urging Trump to move beyond the point where a civil war starts, as it happened when Julius Caesar crossed the northern Italian river, which resulted in the Roman Civil War that led to his dictatorship. “Patriots are united. Those who are against us are exposing themselves. #Liberty & #freedom are on the line. #CrossTheRubicon @GenFlynn.”

These fantastical thoughts have spread through Republicans and far-right groups like a fast-metastasizing cancer, taking over existing organisms and directing them the QAnon way.

Buoyed by the fact that convicted former national security adviser, now-Trump-pardoned former General Michael Flynn is close to Trump and certain that besides influencing thousands of followers, he also influences Trump, QAnonners have been “keeping the faith” and believing big things were going to happen past January 20 to prevent the Biden swearing-in and to preserve Trump’s power and the presidency.

After all, as far back as December, there were rumours on the website of the conspiracy theorist radio host Hal Turner that China was quietly sending tanks into Maine through Canada. Aided by an earthquake in Maine that month, the tale grew bigger and became a secret aerial response by Trump against the invading Chinese. Trump the secret saviour.

Trump fighting the global cannibalistic cabal all alone, except for the help, support and prayers of QAnonners.

Everything would come to a head on January 20. The forces of God and good would not allow child-eating Biden to take the helm of power.

Except that nothing happened.

Trump flew to Florida. Melania changed aboard Air Force One from a black outfit in Washington to a high-priced long and cheery orange-patterned poolside Gucci outfit and Christian Louboutin heels. Not exactly world-changing serious garb for the wife at the side of the fearless leader.

No martial law, no arrests, no public executions. Just Diet Cokes with little umbrellas and the good life of Mar-a-Lago.

As Biden took the oath and officially became president, a QAnon forum showed first hints of their surprise, “I don’t think this is supposed to happen.”

“Anyone else feeling beyond let down?” asked another post.

NBC News reported that on QAnon groups on Telegram “thousands of users expressed a range of reactions: confusion and realisation that QAnon was in fact a hoax”.

“It simply doesn’t make sense that we all got played,” was a reaction comment on Telegram reported by Forbes.

“I was just kind of in shock, I had to re-evaluate the way my life was going to be now; it is so different than my expectation and I literally was just kind of walking around like, What the hell?” said William Weiting to CNN reporter Donie O’Sullivan about how he felt minutes after Biden actually became president. Weiting told O’Sullivan he was not QAnon.

While that was happening, the tone of postings by conspiracy theorists changed as events ran their course

“The storm hits in 45 minutes. Victory at last.”

“God help us, if nothing happens, I will no longer believe in anything.”

“We all just got played.”

The despair in QAnon boards mounted.

Now they are adrift. Q-less.

“QAnon adherents appeared to have fractured into two groups on popular far-right message boards Wednesday,” reported Forbes, “with some realising their crackpot conspiracy theory was a fraud, while others tried to somehow keep the flame of the Crazy Candle alive.”

With many of their most fanatic militants staring at ruined lives with long court battles and tens of thousands in expenses before a likely prison sentence and no heroic last act by Trump, QAnon pushers had a “never mind” moment and perhaps a junior high school moment as well, “always remember this summer”.

Here’s the posting from the former 8kun administrator and main QAnon influencer Ron Watkins, “We gave it our all. Now we need to keep our chins up and go back to our lives as best as we are able.”

That smacks of a stand-down, throw-in-the-towel, it is over message.

“We have a new president sworn in and it is our responsibility as citizens to respect the Constitution regardless of whether or not we agree with the specifics or details regarding officials who are sworn in,” continued Watkins’s tweet.

Oh yes, be good citizens. That is the QAnon reality now.

“As we enter into the next administration, please remember all the friends and happy memories we made together over the past few years.”

Wait. Those were Trump’s last words as he headed to his resort.

But for the suddenly adrift QAnonners, it may not be so easy to turn to an umbrella-adorned beverage by the poolside.

“Political conspiracy theories don’t really die. They evolve into darker, more elaborate fantasies. Nobody drops a grudge with political boogeymen overnight. They don’t stop dreaming of being right all along,” wrote MSNBC’s Ben Collins on Twitter. “They find new stories to tell themselves, usually scarier than the last.”

After a public and spectacular failure, for the people who had been repeating the mantra “Trust the plan,” there is no plan to trust.

There was no master plan by Trump. For many, now there is no master. But, as Collins wrote, such people “don’t stop dreaming of being right all along”.

That “where to go” moment is here for many QAnon adherents. And their loss of a stable master-leader and his “secret plan” to trust only means they are ripe to absorb themselves into other movements with more momentum.

Momentum is precisely what neo-Nazis, Proud Boys and other White-supremacists movements are looking for, and they gain momentum by gaining new members in their ranks.

Nobody wants to feel played. Like everyone else, disenchanted QAnonners want to be the players, be masters of their destiny, be deciders of where it is they go.

They may not know it yet, but many are likely to find where they go by following other Qs by other names, already perhaps the new friends they made. “Scarier than the last,” if Collins is correct.

Milan Sime Martinic is a writer, researcher, and analyst with scientific, economics, and political background. He is the author of the upcoming book on the COVID-19 crisis, ‘PANDEMIC — And The Music Stopped’. He can be reached on Twitter @MilanSimeMrtnc.