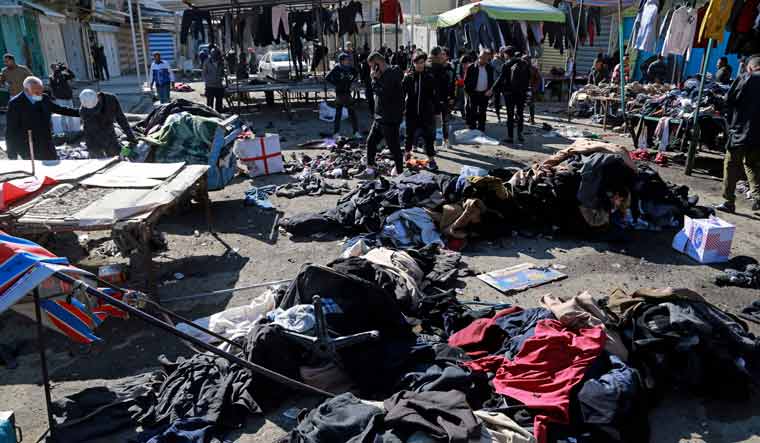 At least 30 people have been killed in a rare twin suicide bombing in central Baghdad on Thursday, AFP reported. 73 have been wounded in the blast that took place at the Bab al-Sharqi commercial area, a huge open-air market for second-hand clothes near the capital’s Tayaran Square.

AP reported medical sources saying the toll could rise. Iraq’s health ministry has dispatched medics across the capital in response to the attack. The market was functioning after nearly a year of restrictions imposed due to COVID-19 pandemic.

A statement by the interior minister says the first bomber rushed to the market saying he was sick. He detonated the bomb once a crowd gathered around him. Then, when a crowd flocked the victims of the explosion the second suicide bomber detonated his bomb.

The area has been cordoned off by security forces.

The attack took place amid heightened political tensions over planned early elections and a severe economic crisis. Blood smeared the floors of the busy market amid piles of clothes and shoes as survivors took stock of the disarray in the aftermath.

No one immediately took responsibility for Thursday's attack, but Iraq has seen assaults perpetrated by both the Islamic State group and militia groups in recent months.

While Iraq's military said at least 28 people were killed and 73 wounded in the attack and said some of the injured were in serious condition. Hospital and police officials said the death toll was actually much higher, with at least 27 dead and more than 60 wounded. They spoke on condition of anonymity because they were not authorized to brief the media, AP reported.Iraq's Health Ministry announced all of its hospitals in the capital were mobilized to treat the wounded.

The attack occurred as security forces pursued two suicide bombers who detonated their explosives in the market near Tayaran Square, according to military spokesman Yahya Rasool.