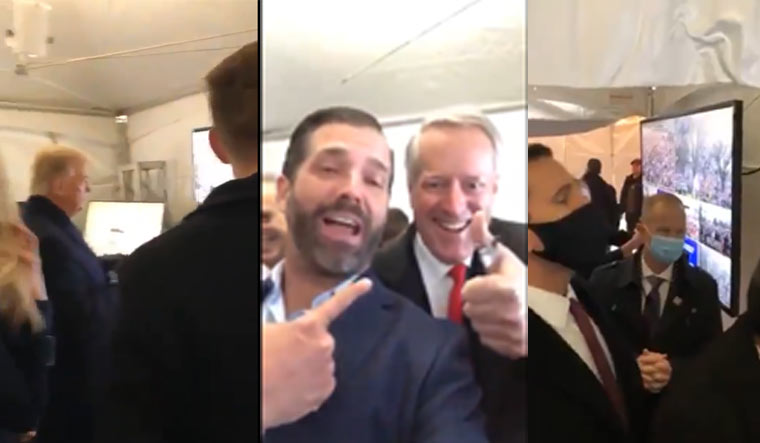 Screengrabs from the video taken by Trump Jr

The backlash against US President Donald Trump continues for his role in inciting the storming of the Capitol building on January 6, after a new video has leaked showing Trump, his family members and close aides watching supporters at the “Save America” rally hours before it turned into a storming of the US Capitol.

The video, taken by Trump Jr, shows the Trumps at a seeming watch party, with the Van Morrison song ‘Gloria’ playing in the background while a celebratory Trump Jr praises “patriots who are sick of the b*llshit”.

Trump, Donald Jr, Kimberly Guilfoyle and others watching the crowd getting fired up hours before they stormed the Capitol, and dancing in enjoyment while the song Gloria is playing. Seems premeditated, no? pic.twitter.com/E6tHufOjiN

Both Trump Jr and his girlfriend, Trump advisor Kimberly Guilfoyle, call for the protesters to “do the right thing” and “fight”. Eric and Ivanka Trump were also present, as was White House chief of staff Mark Meadows.

Following the incident, Trump himself refused to condemn the violence until over 36 hours had passed, initially releasing a timid call for the protesters to go home peacefully. He later condemned the riot in a scripted video where he seemed to announce, for the first time, that he would ensure a “smooth, orderly and seamless transition of power”..

Trump, however, later tweeted that he would not be attending Joe Biden’s inauguration. "To all of those who have asked, I will not be going to the Inauguration on January 20th," he tweeted. In both his latest video and tweet, Trump refuses to name Biden as the winner of the 2020 US election.

House Democrats, meanwhile, are hard at work on proceedings to impeach Trump a second time, after Speaker Nancy Pelosi appealed to Vice President Mike Pence to invoke the 25th amendment and remove Trump from office on grounds of being unfit to hold it. Barring this, Democrats plan impeachment proceedings, for now drafted by Representative Ilhan Omar.

"This is urgent—this is an emergency of the highest magnitude," the Pelosi told reporters on Thursday. "My phone has been exploding with 'impeach, impeach, impeach,’” she said.