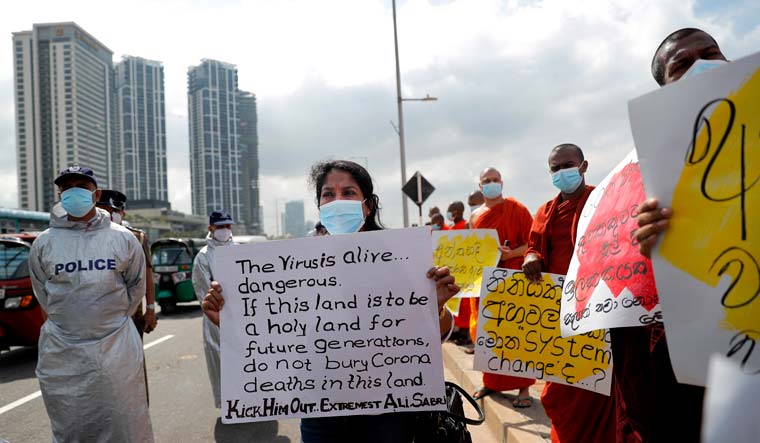 A woman holds a placard and joins pro-government Sri Lankan Buddhist monks during a protest outside president's office, asking the government not to review the policy for mandatory cremation of Muslim COVID-19 victims in Colombo | AP

Ever since the COVID-19 pandemic reached Sri Lanka in March, the island nation's government decided to ban burials for victims of the virus, stipulating cremation as the only means to dispose of infected victims.

The mandatory cremation policy had evoked protests from the minority Christian and Muslim populations, who mostly practise burial. On December 30, the Muslim Council of Britain, an umbrella group with over 500 Islamic groups affiliated to it, announced it would launch legal action against the "forced cremations" in Sri Lanka.

A press release by the MCB claimed "over 100 Muslims" had been forcibly cremated. The MCB release said, "The forced cremations of Muslim bodies in Sri Lanka are a serious violation of the religious freedom of a minority group. It is a violation of international law to delay returning a family member’s body for burial in a timely way unless there is good reason to do so. In this case, the Sri Lankan authorities have departed from the World Health Organisation’s recommendation for the safe management of a dead body during the coronavirus pandemic without any justification."

The MCB claimed it is now preparing to bring this matter to the urgent attention of the United Nations Human Rights Committee for resolution.

A group of Christian and Muslim families had appealed in Sri Lanka's Supreme Court against the forcible cremation policy, but the court junked the plea in December. Hard-line Buddhist groups have called on the government to continue the mandatory cremation policy.

Meanwhile, as the debate about mandatory cremations continues, the College of Community Physicians of Sri Lanka issued a statement on December 31, stating there was no solid evidence that burial of COVID-19 victims would increase the spread of the virus.

The College referred to over 85,000 pieces of published literature on COVID-19 to claim there had not been a single case of the virus being transmitted via a dead body.