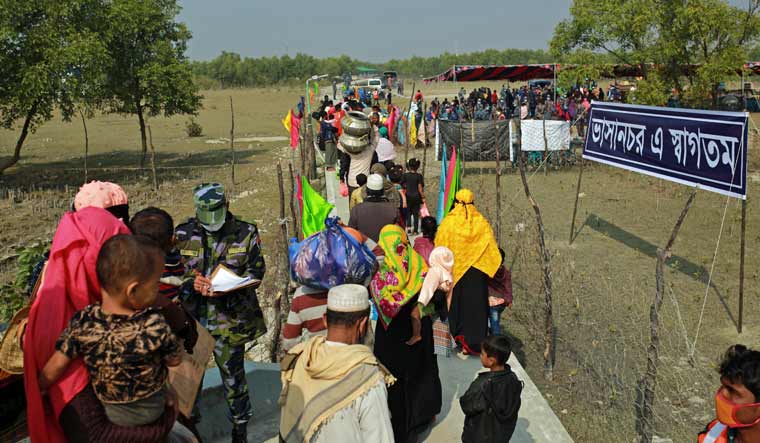 Rohingya refugees stand in a queue after they disembarked from a Bangladesh Navy ship to the controversial flood-prone island Bhashan Char in the Bay of Bengal, in Chittagong | AFP

Bangladesh is moving another group of Rohingya Muslims to the isolated island of Bhashan Char. Five Bangladesh navy ships with more than 1,700 Rohingya refugees left the southeastern port city of Chittagong on Tuesday. They will be taken to Bhashan Char from there. The refugees were being relocated according to their will, authorities say. But, human rights and activist groups say that several of them were forced to go to the island that resurfaced 20 years ago and has been previously uninhabited. The island now has flood protection embankments, houses, hospitals and mosques built at a cost of more than $112 million by the Bangladesh navy. "The island is completely safe," Bangladesh Foreign Minister Abdul Momen told Reuters.

The island is equipped to accommodate 100,000 people, a fraction of the million Rohingyas who fled from Myanmar due to violent prosecution.

On December 4, the first group of 1,642 Rohingya refugees were sent to the island. Human rights groups had opposed the move even then. The refugees had been living in squalid conditions in a refugee camp at Cox's Bazar.

The relocation is being opposed by International aid agencies and the UN as they fear a big storm could overwhelm the island and endanger thousands of lives. In 1991, a cyclone caused a 15-foot tidal surge and nearly 143,000 people were killed. The UN has also said that the refugees should make the choice to relocate out of free will.

In August 2017, about 7,00,000 Rohingya Muslims fled from Myanmar to Bangladesh when Myanmar's military began a harsh crackdown on the minority group following an attack by insurgents. Military and security forces have been accused of committing inhuman crimes against the Rohingyas like rape, killings, and burning of thousands of homes.