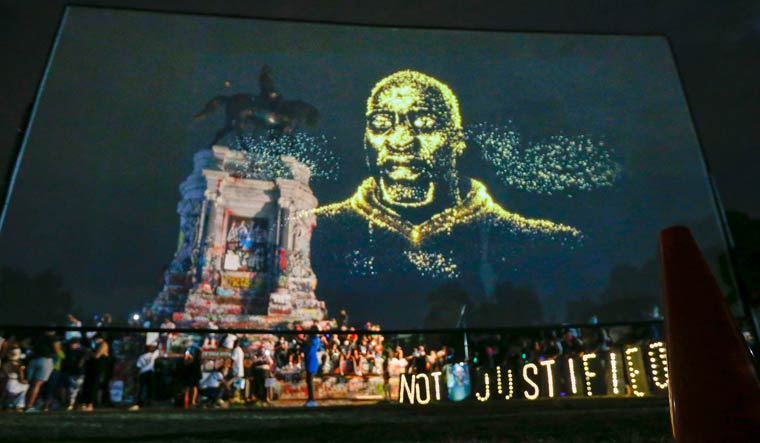 The footage of an African-American being choked to death by a police officer in May caused protests to flare across America. The Black Lives Matter movement gripped the country when protests began in the US after George Floyd's death.

Anger and resentment was already brewing due to the killing of Breonna Taylor, a medical worker. Taylor was killed on March 13, in a police raid gone wrong. The police said they had a warrant to search Taylor's apartment to investigate two men who were believed to be selling drugs from her apartment. Taylor was said to be in an on and off relationship with one of them, but had severed ties with him. Taylor's boyfriend Kenneth Walker shot an officer in the leg after the police broke the door off its hinges. The police responded by shooting Taylor five times. One of the officers, Detective Brett Hankison, who has since been fired is said to have fired ten rounds blindly into the apartment.

On May 26, hundreds out Minneapolis residents called for justice—they marched to the police precinct.

On the same day, the Minneapolis police chief, Medaria Arradondo, decided to fire all four officers involved in Floyd's death and launched an FBI investigation into the incident. Protests continue the next day-- protests erupt across the nation and fires and looting take place near the 3rd precinct in Minneapolis.

On May 28, protests erupted in other nations like Liberia and Nigeria. France, Australia,United Kingdom and Switzerland joined in the next few days.

The 3rd Precinct of the Minneapolis Police Department was set on fire amid intense protests on May 28.

On May 29, Derek Chauvin, the police officer directly responsible for killing George Floyd was charged with third degree murder and second degree manslaughter.

Two Fort Collins, Colorado residents organised a walk of solidarity on May 31.

On June 1, Denver Mayor Michael Hancock announced extension of curfew date to June 4. Hancock on May 31 had placed curfew from 8 pm to 5 am, which was supposed to last till June 1. The step was taken to quell outbreaks of property damage and violence between police and protesters.

On June 1, an independent autopsy on George Floyd, ruled his death as the result of homicide. The Hennepin County Medical Examiner’s Office had ruled Floyd’s death to be a result of not only compression on his neck but of heart disease and drug use of both fentanyl and methamphetamines

Protestors gather at The Oval, Washington on June 2 for an independently organised gathering at City Hall.

On June 3, Minnesota Attorney General Keith Ellison charged the three police officers who were fired—Tou Thao, J. Alexander Kueng and Thomas Lane, with aiding and abetting the murder of Floyd.

On June 3, the Senate Bill 217 was introduced in Denver, which required  “body-worn cameras to their officers and requires all recordings of an incident be released to the public within 14 days after the incident.”It also went on to banning chokeholds and required annual reports to Meade about each agency’s use of force.

On June 4, a memorial was held for George Floyd.

On June 5, a US District Court ordered Denver police to stop use of tear gas, plastic bullets and flash grenades against protestors.

On June 7, the City Council announced to protestors that they will begin the process to disband the Minneapolis police department.

On June 14, another African-American, Rayshard Brooks was shot multiple times by the police. Brooks was found sleeping in his car  in the drive-through of Wendy’s, a fast food chain. After Brooks failed a sobriety test, he was shot while he was trying to flee.

Wishing hours of the shooting, Garret Rolfe, the police officer who shot Brooks was fired. On June 17 he was charged with with felony murder and aggravated assault.

On September 4, a seven Rochesters police officers involved in the killing of Daniel Purdue were suspended. And New York Attorney General Letitia James said that Purdue’s death was being investigated. Purdue was suffocated by police officers in Rochester in March. Purdue, while experiencing a mental health episode, was running about naked on a street. He was restrained and a spit hood was put on him for about three minutes.Purdue was eventually taken to the hospital, where he was on life-support. Seven days later, he died when his family took him off life support.

On September 7, protestors sat outside Rochester's police headquarters. They were naked, like Purdue was, when he was suffocated. Several of them wore minimal clothing and some of them had Black Lives Matter written across their chest.

On October 26, Walter Wallace Jr, an African-American was brutally shot by police in Philadelphia. The police said that Wallace was wielding a knife and walking towards them.

Wallace Jr’s shooting sparked further protests in the country and around 30 police officers were injured as protests took place on October 27. 33 people were arrested for throwing bricks, rocks at the police officers in Philadelphia.

At 1.45 am on October 27 an African-American woman named Rickia Young, who was in a car with her toddler son and a teenage nephew was attacked by two dozen police officers who hit her car with batons, shattering windows. They dragged her and her nephew out of the vehicle. The toddler was taken out of the backseat as well. The incident took place in the chaos of protests in Philadelphia.

The movement has been a historic one and here are some important outcomes from it:

New York city Mayor Bill de Blasio vowed that he would work towards moving funding from the city's police department towards youth and social services.

A database was set up to collect footage of police violence at demonstrations across the US.

The protests sparked wide-ranging conversations about racism in institutions, organisations and industries.

The co-founder of Reddit Alexis Ohanian stepped down from the company's board of directors and urged that the company replace his seat on the board with a black candidate.

The Grammy’s announced that they would no longer use the word ‘urban’to describe music of Black origin.

Here is what happened around the world:

On June 9, London mayor Sadiq Khan launched a ‘diversity commission”. The commission will investigate which statues should be retained, which ones with ties to slavery should be removed.

In Germany, graffiti artists Eme Freethinker painted a portrait of George Floyd on the last remaining sections of the Berlin Wall.

Syrian painter Aziz Asmar, along with two of his friends created an eight-food-high mural on a bombed Idlib building, featuring the words, ‘I can’t breathe’to show solidarity with anti-racism protests in the US.

People in nations like Amsterdam, Poland and Mexico came out to protest George Floyd’s killing.