Brazil: What will become of tropical Trump now that Trump is toast?

Bolsonaro parleyed his sameness and relationship with Trump into political power 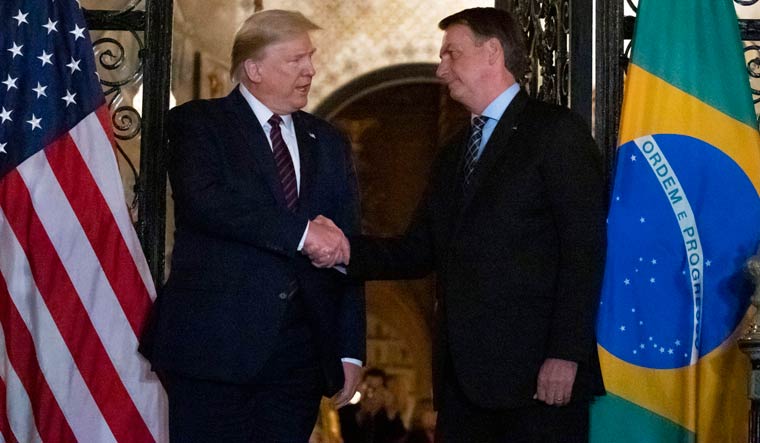 Brazilians have always looked up to the United States and the two countries have historically maintained a close relationship. But there has never been an infatuation with America’s leadership as there has been since Bolsonaro began to model himself after the norm-bending, outrage-provoking, fast-tweeting Trump. But, will the Bolsonaro formula work without the context of Trump?

Until now, Trump’s presidency has worked quite well for Bolsonaro. He has been able to push Brazil in extreme positions that closely follow those of Trump, in internal policy as well as international politics. Trump’s style has provided a veneer of normality, perhaps legitimacy, to the brand of politics Bolsonaro has been following.

In style, Bolsonaro has been a poke-in-the-eye climate denier, anti-conservationist, and anti-multilateralist. He has responded to China and Europe, and the protect-the-Amazon people with the confrontational flair of someone who knows that he is safely protected by a bigger boss.

As the global political climate changes with the election of Joe Biden, will Bolsonaro be able to contain himself from Trump-like counterpunches when he is no longer covered by the shadow of Trump that has virtually obscured all flagrancies and oversteps because of the inequity in strength and consequence?

Will his supporters — who share many similarities with American Trump supporters — continue to support a newly neutered Bolsonaro whose actions are likely to create a greater backlash both internally and internationally once the Trump populist movement he was part of is out of power and possibly on a long-term losing trend?

Banking on a long-standing Brazilian love for America, Bolsonaro parleyed his sameness and relationship with Trump into political power. Will it last beyond Trump?

Perhaps it was all too similar to survive, say international observers.

As Brazilians rejoiced, many perhaps even despite their dislike of Bolsonaro, in the close relationship with the United States, believing in Bolsonaro rhetoric, they have been in for the disappointment of high expectations that Americans have become familiar with in the Trump years.

The hyperbole that is meant literally and a penchant for pushing an alternate reality has been as easy-to-come in Bolsonaro’s speak as they are in Trump’s. Like his idol, much of Bolsonaro’s political capital is the result of its inflexible macho-nurturing image. Big promises. Charges of “fake news,” using the media as a foil, in-your-face politics.

Idol is not too strong a word to describe what Trump is to Bolsonaro. A Bolsonaro Facebook Live transmission this year featured about an hour of only himself sitting attentively watching a Trump speech. After the election, even after Trump had tacitly accepted his defeat, Bolsonaro hung on, refusing to acknowledge Biden’s victory — a risky action considering that his country is likely to need to work with Biden and the US, especially after having fired-off a Trump-like tweet at a Biden in anger at a comment during the debates.

The far-right has ingloriously used the “fake news” charges and misinformation as a cudgel to beat back opposition to an agenda that attacks conservationists, feminists, gays, blacks, the indigenous. In a parallel to Q-Anon charges in the US that convinced some that Hillary was running a paedophile ring in the basement of a pizzeria in suburban Washington, Bolsonaro supporters, have raised emotional temperatures by charging former president Lula’s political party with child abuse, paedophilia, prostitution, nudity, and more, crying about corruption while deep in corruption itself.

The strategy works well in whipping up support from Evangelicals and Christians who drape themselves in the cross, claim righteous indignation, and crowd in rallies and public appearances. One would be forgiven for not knowing whether this refers to Trump Country or Bolsonaro Country. The reality is that they tap into the same emotions, target similarly inclined audiences and that they are that similar.

The backlash and repulsion that keep a check on those who exploit fear and social tensions for political purposes have been cushioned in Brazil and the world by the example from America. Trump has used the fear of violence to create stereotype-based divisions and to foster an anti-liberal climate where conservatism is the shelter of the afraid. Bolsonaro has closed paralleled that model to build boisterous political support.

It is easier to fan prejudices in your backyard if doing so goes cheered and unimpeded in the yard of your more powerful neighbour. Even with a knack for repeating tropes that stir biases and wake up old hates, it is easier if you are not the only one. Bolsonaro has benefited from this.

Of impact in Latin America is whether, with Trump no longer there to provide cover, Bolsonaro will be able to sustain his run.

On the afternoon of January 20, Bolsonaro will be naked and alone. What he does and what he says will stand there for what it is, no longer lost in the cloud of the Trump gish gallop of outrageous actions overwhelming news and public opinion with a never-ending fast run of statements that are independent of reality.

Trump is not just Bolsonaro’s shield. Bolsonaro’s very ideas were at times an appendix of the Trump political shtick. The self-described “biggest fan” has parroted Trump on the coronavirus pandemic — a hoax, no worse than a cold, said Trump, “a little cold,” said Bolsonaro. Hydroxychloroquine is the cure said Trump in the north and Bolsonaro in the south. That the US and Brazil are number one and number two of the countries with the worst numbers of pandemic patients and deaths is no coincidence.

Imagine how bad Brazil’s performance against the virus would look without being topped by America’s disastrous response. Bolsonaro has gotten a free ride that is about to end.

The irascible Bolsonaro has also copied the Trump line on the Paris accords and on moving his country’s embassy from TelAviv to Jerusalem, although he did not follow through due to pressure, the positions consumed plenty of international goodwill toward Brazil.

China has also been a favourite Bolsonaro punching bag. Trump punches China. Bolsonaro follows. In both cases, there is a xenophobic undercurrent that they make no effort to hide.

To be sure, in Trump’s absence from the world stage, vulgar and offensive comments are less certain go unnoticed, as when Bolsonaro denigrated a woman, of whom he said she was “not worth raping,” or when he said that indigenous people “live like in the zoo,” or that if his sons were gay he would “prefer they die in a car accident,” or that those careful to avoid COVID-19 are “sissies.”

The shiny object for Bolsonaro has always been that he has a special relationship with America, and he has had the crumbs off Trump’s MAGA table to show for it — Status as a non-NATO ally for Brazil, and the deal to allow the U.S. to use its Alcântara Launch Center for space launches which, despite its location close to the Equator (a major fuel savings factor in space flight because it takes less to achieve escape velocity due to the Earth’s faster speed at the widest of its bulge) has not had eager US clients beating its door.

Faithfully following his idol, Bolsonaro has been regularly poking China in the eye. China itself has not given it much importance because it has been mired in a trade war of sorts with the U.S. But come January, with Biden likely to take a different approach to Sino-American relations, China may find greater leverage over Brazil as it is a greater source to Brazilian exports, outnumbering the U.S. by a factor of five-to-one.

Bolsonaro may find it counterproductive to yell at Biden in tweets as he did in response to a Biden comment about raising $20 billion for the protection of the Amazon. “OUR SOVEREIGNMENT IS NON-NEGOTIABLE,” said Bolsonaro in all-caps after speaking of unfounded threats and rejecting out of hand monies that Biden wants to be destined for the Amazon as “bribes.”

While China and the US are likely to take a more sober approach toward dealing with Brazil, it will be squarely in their geopolitical interests and it will leave Brazil as a mere pawn to play over in a game of geopolitical chess. There will be no longer illusions of a grand alliance with the north. Chess is about strategy, not a rushed fairy tale.

Bolsonaro’s signature climate-change-denier Develop-the-Amazon policies may also become a casualty of Trump’s defeat. If Biden and the European Union work together on the climate issue, Bolsonaro may find himself and his climate outlaw policies under increasing economic pressure from its most important trade partners.

Also clashing with the Bolsonaro brand are likely to be Biden’s expected programs to defend and respect women, LGTBQ, minorities, and indigenous peoples.

Bolsonaro, who has been referred by the Australian Institute of International Affairs as “a captain who was forced into retirement from the Army in 1988 after he threatened to bomb army barracks to obtain salary increases and then turned into an unsophisticated and mostly irrelevant federal deputy,” and who is referred as such in countless other publications, does not have the depth of experience or Trump’s utter un-embarrassable character to match Biden in a high-stakes skirmish.

Yet the loneliness is already closing in on him, and rapidly, even in his neighbourhood. Argentina, the second-largest economy in South America, and Bolivia, the country with the largest land border with Brazil, have shifted from right-wing allied governments to left-wing adversaries, leaving Bolsonaro increasingly isolated. His anti-Argentinian and anti-Bolivian comments making him a political pariah in his backyard.

Trump-light or Brazil’s version of trigger-happy authoritarian Rodrigo Duterte of the Philippines, Bolsonaro is at its core, a populist of the tough-guy authoritarian variety.

Face the virus with an open chest, he told his countrymen. “You have to end this business. I am sorry for the dead. We are all going to die one day. It is no use running away from it, running away from reality, it has to stop being a sissy country.”

Through most of its history, Brazil has been a country of top-down leadership over its people rather than society driven. In that environment, in paralleling Trump, Bolsonaro has a country more predisposed to live with such leadership as it did under the military dictatorship for which he openly longs.

If it appears that the Trump comparison is perhaps a bit more than it deserves, examines this news item in the Folha de SãoPaulo daily: “Authorities work to dispel theories and see an orchestration to discredit the voting process.”

Brazilians who support Bolsonaro have been quick to sign on to the conspiracy theories spun by Trump about the results of the US election. In media interviews, they see Biden’s election as illegitimate. This has not been lost on Bolsonaro.

The reality is that in Brazil it is already a given that Bolsonaro will try to contest the results of the election if he is not re-elected.

“If you think Bolsonaro has not been extremely successful in eroding the political system, consider this,” tweeted Oliver Stuenkel, professor of International Relations at the Getulio Vargas Foundation in São Paulo, and author of ‘The Post-Western World’/ ‘O Mundo Pós-Ocidental,’: “Brazilian election officials recently said it’s ‘inevitable’ that Bolsonaro will question results of 2022 presidential contest if he loses. And that has been normalized.”

Perhaps the Tropical Trump is eagerly trying to learn his guiding light’s playbook on how to handle elections that reject you, eager to run his plays if he has to. Or, perhaps he will get a preview of how the movie ends.