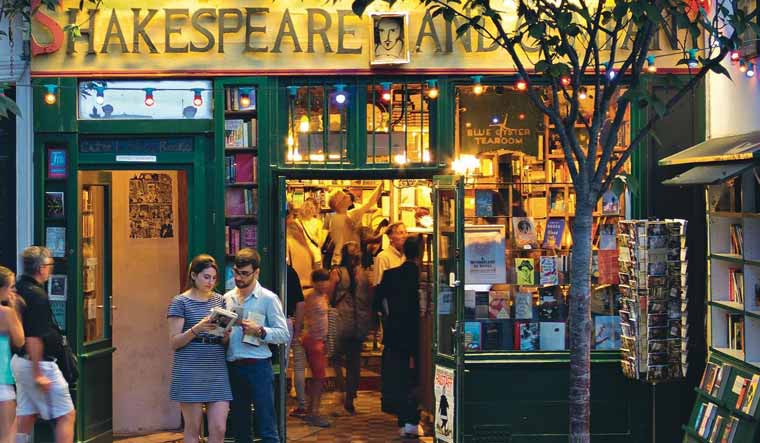 Representational image of the Shakespeare and Company book store | Via Facebook

Be not inhospitable to strangers lest they be angels in disguise, says a sign on the wall at Shakespeare and Company on Paris’s Left Bank.

People go to Paris for many reasons. For decades, book lovers have followed the path of Hemingway and F. Scott Fitzgerald and dropped by the tiny, nondescript Shakespeare and Company book store, perhaps the most famous independent bookseller in the world.

It is a place like no other. Old college libraries and Potter fairy tales do no justice to the originality and treasure of this place — facing Notre Dame along the Sienne just off the city’s Latin Quarter. For season after season, it was always a place of shoulder-to-shoulder closeness between patrons leafing through the pages, a place to find hidden crevices between the bookshelves where one could ensconce oneself from the world and get lost in the lines of a forgotten book, finding spiritual nourishment in a book lover’s most idyllic manner.

The English-language book store has been a legendary Paris icon for nearly 70 years with its weather-beaten bookshelves in its half-courtyard out front on Rue de la Bûcherie, and sometimes with a couple of tables to sit and read and feel the Parisian air.

Ahh, but inside, your first step takes you into a discontinuity in the flow of time where you could jump from one period to another as easily as picking up the next book. Books were not organised in any manner or by any category, that is what made it deliciously fanciful, just a hand-reach away from the next literary adventure.

That is why there was often a line of people waiting to get into the store, to climb its narrow and steep stairs to sit on the bed of an aspiring writer living there. One would swear you could feel the words of Victor Hugo. It is said that over the years, some 30,000 writers have roomed between the books seeking solace and inspiration. Definitely not Amazon, but genuinely amazing.

Allen Ginsberg, Henry Miller, Langston Hughes and Anaïs Nin were among the greats who spent time reading lines and enjoying the crinkle of the yellowed and dog-eared pages of the hidden gems of books at Shakespeare and Company.

But people packing every foot of the cozy bookshop is not something for pandemic times. The 17th-century building is small, and there is a book in every inch, making it impossible to maintain any kind of social distance inside.

Shakespeare and Company has survived the rise of television, movies, cell phones, the internet, Kindle, and myriad other distractions. But COVID-19 is turning out to be a real threat to its existence. The store is in trouble because the pandemic exacerbated the reduction of out-of-town visitors to Paris due to the Charlie Hebdo terrorist attacks in 2015 and the fire at Notre Dame last year, a stone’s throw in view from the book store.

Paris is now under a second mandatory shutdown. Book stores, as all non-essential stores, have been reduced to curbside pickup of books ordered online. This has meant an 80 per cent decline in revenues, according to Sylvia Whitman, daughter of the fabled and laissez-faire late proprietor George Whitman.

In an email to customers, Whitman last week informed them that the book store was facing “hard times.” “At this point, we’ve used all our savings,” she has said.

The backroom of the shop has been converted into a temporary online sales and packaging centre to handle daily online orders that have risen to the thousands since the appeal, up from a regular 100 a day.

Global media is reporting that Parisians have been contacting Whitman just to make a donation to keep it alive without purchasing a book, “and to share memories of falling in love there or even sleeping among its bookshelves”.

This is the store that published James Joyce’s Ulysses, when American and British publishers would not because authorities had deemed “too obscene”. There is a story that the Irish writer used the shop as an office, transforming its namesake’s birthplace of Avon to “Stratford-upon-Odeon,” in reference to its earlier address at Rue de l’Odéon.

This is the store where countless aspiring writers were allowed to sleep in the many cots between the shelves, in the passages, and under books. “Tumbleweeds,” named them the late laissez-faire Whitman, who required of them only a couple of hours of reading and writing, oh, yes, and a one-page biography.

Now, this is the store where his daughter is asking those strangers who have passed through its door, who have smelled its books, and who have perhaps felt like great writers do just by being there, to be angels in disguise to help save the shop.

Whitman has set up a Friends of Shakespeare and Company Fund to make it possible online to support the bookshop and to “bring all our members to Paris and to the bookshop”.

“While these sales have provided great relief, we recognize it is unrealistic to expect an exceptional level of website activity to continue for the unforeseeable number of months when people remain unable to travel,” says Whitman’s plea in the fund’s website: https://friendsofshakespeareandcompany.com/

“We’re committed to bringing the bookshop to you. As well as a way of raising funds, the revived Friends of Shakespeare and Company seeks to reach out and strengthen our community of friends and fellow readers around the world,” says the website.

That is as good a comfort in lonely pandemic times as are the words on the risers of the old staircase in the bookshop that is a Paris and world institution. They are the words of the 14th century Persian Sufi poet Hafiz, one line before each step: “I wish/I could show you/when you are/lonely or/in darkness/the astonishing/light/of your own/being.”