US records more than 250,000 COVID deaths; situation to get worse

The country now have about 11.5 million confirmed cases of COVID-19 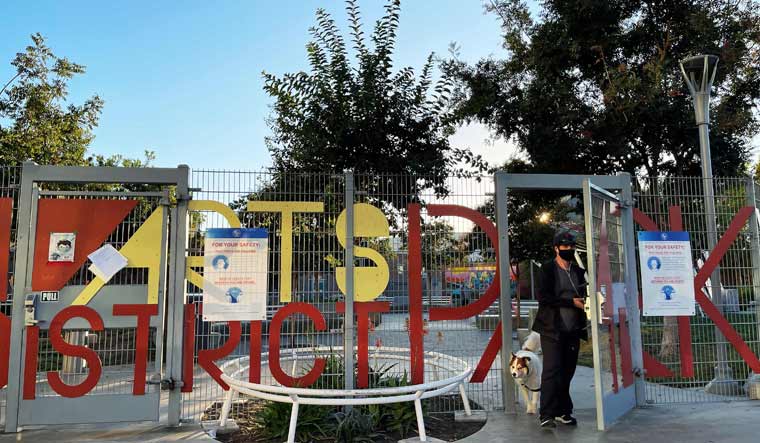 A man wearing a facemask exits a dog park in the Arts District amid the coronavirus pandemic, November 18, 2020, in Los Angeles, California | AFP

The US has recorded over 250,000 deaths from COVID-19, a bleak milestone as cases soar once again across the country, worst-hit by the deadly infectious disease that has claimed over 1,349,000 lives across the world.

According to Johns Hopkins University, the US has now reported 250,537 deaths and over 11.5 million confirmed cases.

It has more reported infections and a higher death toll than any other country worldwide.

The coronavirus is now killing at least one American every minute of the day, bringing the country to another horrific milestone on Wednesday: At least 250,029 people in the country have died of Covid-19 since the first death on February 29 in Washington state, CNN reported.

The situation is only going to get worse, warned Dr Jonathan Reiner, a professor at George Washington University School of Medicine, amidst the continued obstruction from the Trump administration for a smooth handover to the incoming administration of US President-elect Joe Biden.

"The horrible death count that we saw yesterday in the United States ... reflects the number of people who were being infected three weeks ago — two to three weeks ago, because that's the lag," Reiner said on Wednesday.

While some hospitals are running out of health care workers, the US once again set a new record for hospitalised COVID-19 patients — 76,830 on Tuesday, according to the Covid Tracking Project.

America's top infectious diseases expert Dr Anthony Fauci said the country was "going in the wrong direction at a very precarious time", with people more likely to gather inside as the weather gets colder.

In an interview on the BBC News channel, Fauci warned about the new surge in cases leading to more deaths.

At the end of March — when the US had recorded 2,200 deaths - Fauci, Director of the National Institute of Allergy and Infectious Diseases, predicted the pandemic could kill up to 200,000 Americans and infect millions more.

"It's a very serious situation because there are lagging indicators," the 79-year-old physician said.

"So when you see the massive increase in cases as we're seeing now particularly as more and more people are doing things inside, we're in a very difficult situation," he said.

Fauci repeated his call for people to "double down" on public health measures, such as wearing face coverings, physical distancing and avoiding crowds.

"They sound so simple and we know they can work. But there's a degree of Covid fatigue - people just are worn out with these restrictions," he said.

He urged people to "hold out for just a little longer because help is on the way" in the form of vaccines.

While there's great news on the vaccine front, most Americans probably will not be able to get vaccinated until the middle of next year.

The Pfizer/BioNTech vaccine is 95 per cent effective and has shown no serious safety concerns, Pfizer said on Wednesday. BioNTech said it plans to request emergency use authorisation from the US Food and Drug Administration on Friday.

Another vaccine, from Moderna, is 94.5 per cent effective against coronavirus, according to early data released this week. The company says its vaccine did not have any serious side effects.

Frontline workers and the vulnerable people are expected to be the first to get the vaccine, health experts have said.

But they also say Americans must double down on safety measures, as there will be many more illnesses and deaths before a vaccine is available to most people.

By the end of the year, the US should have about 40 million doses of vaccine, CNN quoted Health and Human Services Secretary Alex Azar as saying.

"And production of course would continue to ramp up after that," Azar said on Wednesday.