Magufuli's regime has cracked down on political dissent, muzzled media 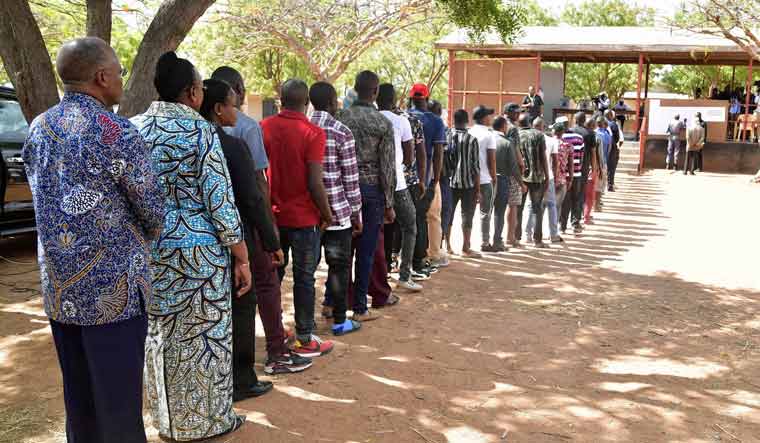 Tanzanian President John Pombe Magufuli and First Lady Janeth stand in the queue before casting their ballots at a polling centre during the Presidential and Parliamentary elections in Chamwino district in Dodoma, Tanzania | Reuters

Voters cast their ballots at Tanzania's elections marred by accusations of 'widespread irregularities'. In a contest against 14 challengers, President John Magufuli is eyeing a second five-year term. Challengers have complained of restricted internet access besides the use of fake ballots by Magufuli supporters.
Magufuli's leading opponent Tundu Lissu, was shot 16 times in 2017 in what remains an unsolved case. Lissu said he was getting reports of widespread irregularities and his party's representatives were being prevented from entering polling stations. Another opposition leader, Zitto Kabweof the ACT-Wazalendo party, said residents had seized fake ballots in his constituency where he was running for re-election.

“This is the election where any resemblance Tanzania bears to democracy probably ends,” said Dan Paget, a politics lecturer at the University of Aberdeen in Britain told the New York Times. Several members of the international media did not receive accreditation to cover the polls.


Magufuli's regime has cracked down on political dissent, muzzled media and rights groups and passed legislation reinforcing the party’s hold on power.

“This election has been ruined by the NEC,” Kabwe said in a tweet. The electoral commission denied the allegations. “There has been information circulating on social media alleging that there are ballot boxes with fake ballot papers,” chairman Semistocles Kaijage told Reuters. “These allegations ... are unofficial and unsubstantiated,” Kaijage said. There were also nationwide problems accessing and uploading information to some social media platforms.

"We're seeing some blocking and throttling of Twitter," Twitter said in a statement from its public policy account. Magufuli, 60, urged voters to turn out after he cast his ballot in the capital Dodoma.
The UN Secretary-General António Guterres called on Tanzanian political leaders and their supporters to “refrain from violence.” The head of the African Union, Moussa Faki Mahamat, urged the authorities to “ensure a conducive environment to enable citizens to cast their votes in a safe and peaceful manner.”


Voters have cast their ballots, they are being counted and results will be out in a week.

58 per cent of votes in 2015 and now holds about three-quarters of parliamentary seats.