His win has gladdened the hearts of leftists in Latin America 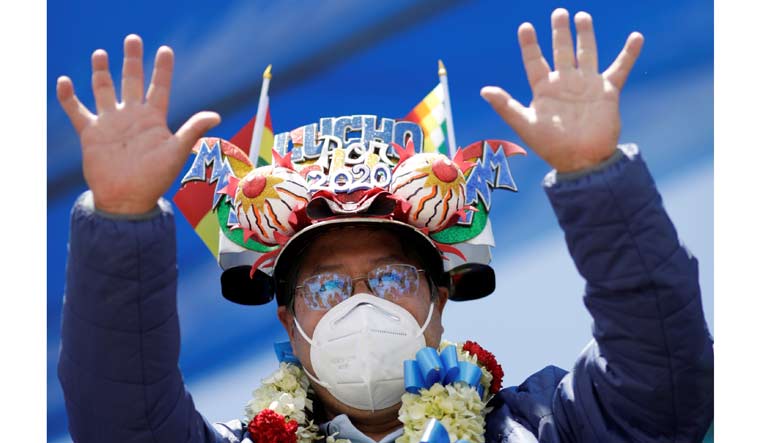 Luis Arce gestures during a celebration after he won the presidential election, in El Alto, outskirts of La Paz, Bolivia | Reuters

Luis Arce was elected as President of Bolivia in the elections held on October 18. He is the chosen successor of Evo Morales, who was president of the country from 2006 to 2019.

Morales made history as the first native Indian to be elected as president in 2006. Although two thirds of the 11 million Bolivians are indigenous, they had been ruled by a tiny (15 per cent of the total population) white elite of European descent in the last five hundred years. The oligarchic rulers had excluded the Indians away from political and economic power. They had marginalised and discriminated against the Indians keeping them as poor, illiterate and backward. Bolivia was like South Africa minus the formal label and laws of Apartheid. Morales fought against this racial domination by mobilizing the Indians, uniting them and getting them to vote him as president in 2006. Morales comes from a typical poor Aymara Indian family without any educational qualifications.

As president, the first priority of Morales was to uplift the Indians from poverty, provide access to economic opportunities and empower them politically. In 2009, he got a new constitution for the country to reflect the rights and aspirations of the Indians. He got the name of the country changed to “ Plurinational State of Bolivia” in recognition of the many distinct indigenous communities of the country.

Morales had done a tremendous job of transforming the country. Firstly, he gave unprecedented political stability to the country which had gone through many coups and dictatorships. There were five presidents in five years before he came to power. 36 of the 83 governments in the past had lasted a year or less. Morales was the longest-serving president of the country. He survived a few coup attempts, separatist insurgencies and US destabilisation.

Secondly, his government had reduced poverty drastically in the fourteen years of his government with pro-poor and Inclusive Development programmes. His administration had reached out to the indigenous communities in rural areas with building of schools, hospitals, roads and utilities. The World Bank and other outside agencies have recognized this as the most successful poverty reduction in Latin America.

Thirdly, Morales nationalised the oil and gas and other sectors from which he increased state revenue. He got better price for the gas exported to Brazil and he even fought with his idol President Lula for higher prices. He ploughed the increased revenue into welfare projects.

Fourthly, Morales managed the economy prudently and pragmatically despite his radical leftist rhetoric. This was evident from the impressive average annual GDP growth rate of 5 per cent from 2006 to 2018. During his terms, inflation and external debt were low and the currency remained stable. Before his presidency, the country had suffered hyper inflation and currency devaluations in four to five digits and had exploded with debt crises.

More importantly, Morales gave dignity, self esteem and pride to the Indian community. The Bolivian ladies wore polleras (traditional pleated and long skirts) proudly to offices and shopping malls. During the protests against the interim government, the Indians chanted “the pollera will be respected!” Before his official inauguration in 2006, he visited the ancient temple in Tiwanaku and performed traditional rites seeking the blessings of Indian gods.

Morales led a simple and austere life without any personal ostentation. He was free from large scale corruption and did not acquire personal wealth or indulge in any luxuries. He continued as a bachelor and dedicated most of his time for the country, except for his indulgence in playing football and occasional girlfriends.

After having been in power for such a long period of 14 years, Morales should have stood down in the 2019 elections, as mandated by the term limit imposed by his own new constitution. This would have safeguarded his great legacy of achievements.

But hubris went to his head and he started believing that he was indispensable. He held a referendum in 2016 seeking approval for another term. This was rejected by the people. Disregarding the verdict, he went to the constitutional court and got from friendly judges a verdict approving his re-election, on the spurious ground of his personal human rights. This shocked and divided his own supporters.

Morales made his worst mistake during the counting of votes in the October 2019 elections. The live counting and telecast was shut down abruptly and mysteriously for almost 24 hours, when the margin between Morales and his nearest rival Carlos Mesa was narrowing. The next day, counting was resumed and it was announced that Morales won with more than 10 per cent difference in votes. This raised suspicions. When the opposition and external election observers questioned, Morales agreed to an audit and later to holding a new election. But it was too late.

Seeing the best opportunity to bring down Morales, the opposition resorted to protests and clashed with his supporters. The military and police took the side of the protestors and turned against him. The US-trained army chief had advised him to leave the country for his own safety. He got the message and took the offer of Mexico for asylum and from there went to Argentina.

The power vacuum following his departure was seized by a conservative senator Jeanine Anez, who proclaimed herself as the interim president with the support of the military. She was the second vice president of the senate and overrode the claims of the president and first vice president of the senate after intimidating and rejecting their constitutional rights for succession. Anez formed an interim government consisting of conservative whites who wanted to take revenge on the Indians who kept them away from power for fourteen years.

The interim government gave extra powers to the security forces which brutally suppressed the protests of the Indian supporters of Morales. During her swearing in ceremony, Anez made a show of bringing Christianity with her, after the last administration’s emphasis on indigenous traditions. “The Bible has returned to the government palace!” she declared, carrying an oversized Bible. Anez posted racist twitter messages belittling indigenous people. Her supporters burnt the multicloured traditional Indian flag insulting the indigenous.

The interim government carried out a witch-hunt against the leaders of MAS (Movimiento Al Socialismo- Movement for Socialism, the political party of Morales) with detentions and prosecutions. They charged Morales himself with terrorism (by inciting anti-government protests), communism, drug trafficking and sedition. Interior Minister Arturo Murillo vowed to jail Evo Morales for the rest of his life. Several ministers of Morales' government went underground, left the country or sought refuge in foreign embassies. The interim government even sought the help of Israel to fight “terrorism”. They resumed relations with US, which had earlier shunned Morales. They suspended relations with Venezuela and Cuba and sent hundreds of Cuban doctors and Venezuelan diplomats home. Anez participated in a ceremony in Santa Cruz to honour the military veterans who captured Ernesto “Che” Guevara in the Bolivian jungle on October 8, 1967 to mock Morales who is an admirer of Che.

The blatant acts of revenge and restoration of policies of discrimination and disrespect to the indigenous people by the interim government pushed the Indians to reunite and vote for their own party MAS. The Indians realised that the white elite had not given up their past racial prejudices.

The President-elect Arce is a moderate and pragmatic technocrat. He was the economy and finance minister of Morales and before that had worked in the Central Bank. He did his Masters in economics from a British University and had worked as professor in a Bolivian university. He was responsible for the successful management of the economy during the presidency of Morales.

Besides winning the presidency with an impressive 55 per cent (as against the 28 per cent of his nearest rival and 14 per cent of the third candidate),the MAS party has also won majority in both the Senate and the Lower House. This means that the government of Arce will continue to be stable and could continue the progressive socioeconomic policies of the Morales presidency. He has said,“We’re going to work and resume the process of change without hate, and learning and overcoming our errors as MAS.”

Morales will soon return to Bolivia from his exile in Argentina. However, he is not likely to get any governmental position. He will continue as head of the party and be active in trade union bodies.

It is important to note that a number of new young MAS leaders have won the elections to the Congress. These talents will be nurtured under the Arce presidency to take over power in the future providing continuity to the rule of Indians. The new Indian leaders and cadres of MAS 2.0 have learnt valuable lessons from the mistakes of Morales and the excesses of the interim white government. With these renewed beginnings, Bolivia is set for a stable political future with economic equity.

The success of the MAS party has gladdened the hearts of leftists in Latin America, who were dismayed by the right turn in some countries of the region. Bolivia has shown that socialism need not be a dirty word as its critics see it in Venezuela, Nicaragua and Cuba. The victory of MAS is an apt response to the right wing leaders such as Bolsonaro and Trump who were waging a war against socialism.

Despite their excesses, the interim government of Anez should be given credit for holding free and fair elections. There were no major incidents of violence or controversies during the elections. Anez was quick to congratulate Arce even before the completion of counting of the votes. The main opposition candidate Carlos Mesa also accepted the verdict gracefully and promptly.

The Bolivian democracy has now become stronger and more stable. The debates and speeches during the Bolivian election campaign of the candidates were more civilised and decent unlike the racist, polarising, ugly, ridiculous and hate-filled noises in the US, the biggest and oldest democracy in the Americas. Bolivia has also averted going to the other extreme of right from left as happened in the case of Brazil. The little and poor Bolivian democratic renewal is a ray of hope and optimism at this time when ugly right wing extremism is vitiating the democracies in the US, Europe and other parts of the world.