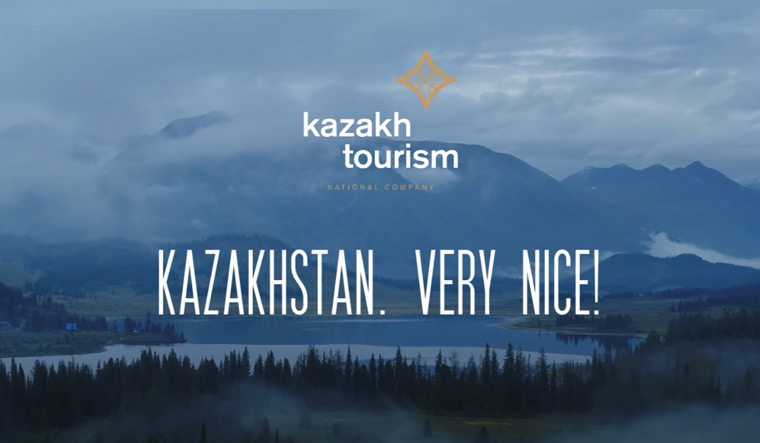 A screengrab from the promo, released with the graces of the country's tourism department

Ever since Sacha Baron Cohen released Borat: Cultural Learnings of America for Make Benefit Glorious Nation of Kazakhstan (better known as Borat)in 2006, Kazakhstan has acquired a dubious relation to the quotes from the film.

From the iconic light-grey suit of its protagonist, Borat, to his catchphrase “Very Nice!”, Borat ended up having tremendous cultural impact on how the world perceives Kazakhstan. Given that this perception was mostly satirical, Kazakhstan initially reacted aversely to the film.

The country’s foreign minister threatened to sue Cohen after the film’s release, and even launched a PR campaign dubbing the country the “heart of Eurasia” in response to the film. Cohen went on to denounce this campaign as the work of the “evil nitwits” of Uzbekistan while in-character at a mock press conference.

Now, following the release of Borat’s sequel (un-laconically titled Borat Subsequent Moviefilm: Delivery of Prodigious Bribe to American Regime for Make Benefit Once Glorious Nation of Kazakhstan), Kazakhstan has chosen to adapt the adage, “If you can’t beat them, join them” with a new promotional film using the iconic “Very Nice!” catchphrase.

The film plays up Kazakhstan’s breathtaking natural beauty as well as its precautionary measures against the coronavirus. The country now report over a hundred cases a day after a peak of nearly 2,000 daily cases in July.

"It's a place you may have heard of, that's nicer than you ever imagined. Where you can find endless steppe, sand, and epic mountain peaks just a short drive from a modern metropolis," the film's YouTube description reads.

"Where garlicky Kazakh horse sausage meets spicy Uighur noodles. Where shopping malls have sandy beaches and glass spheres dot the horizon. Where people are so friendly, you might just end up at a Kazakh toi (a traditional wedding) after a few salams (hello!). How can you describe a place this surprising in just two words? As a wise man one said, 'Very nice!'"

Kazakhstan’s tourism board's deputy chairman even told the New York Times, “In Covid times, when tourism spending is on hold, it was good to see the country mentioned in the media...Not in the nicest way, but it’s good to be out there. We would love to work with Cohen, or maybe even have him film here.”