More than 2,50,000 homes in six provinces have been inundated 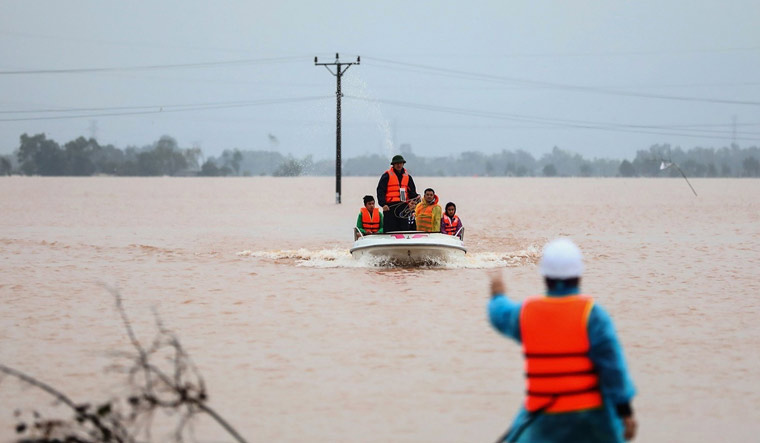 Tropical Storm Saudel, after lashing the Philippines, is now heading to Vietnam, where 111 people have lost their lives due to floods. Authorities said the floods have caused thousands to flee.

“The rainfall coincided with La Niña and the high tide. That is a big problem,” Quezon Governor Danilo Suarez told CNN. The state-run Vietnam News Agency (VNA) reported that more than 7,200 hectares of food crops have been submerged and damaged, and more than 6,91,000 cattle and poultry have been killed or swept away in floodwater. "These devastating floods are some of the worst we have seen in decades," Nguyen Thi Xuan Thu, the president of Vietnam's Red Cross Society, said.

Sixteen national highways and 161,880m of local roads in four provinces have been damaged due to the flooding.

At least 6,000 people have been evacuated from provinces south of Manila as of Tuesday night. In Quezon province, boats were being used over waist-deep water to ferry citizens to dry ground.

Weather in some areas northeast of Manila had started to clear, with floods receding, Elson Egargue, a disaster official in Aurora province, told DZMM radio station. Storm Saudel caused considerable damage in the Philippines, causing thousands of residents to leave. Vietnam usually faces rains during October, but in recent weeks, it has faced poor weather that has affected agriculture and irrigation. The flooding has caused more than 2,50,000 households in six provinces to be inundated.