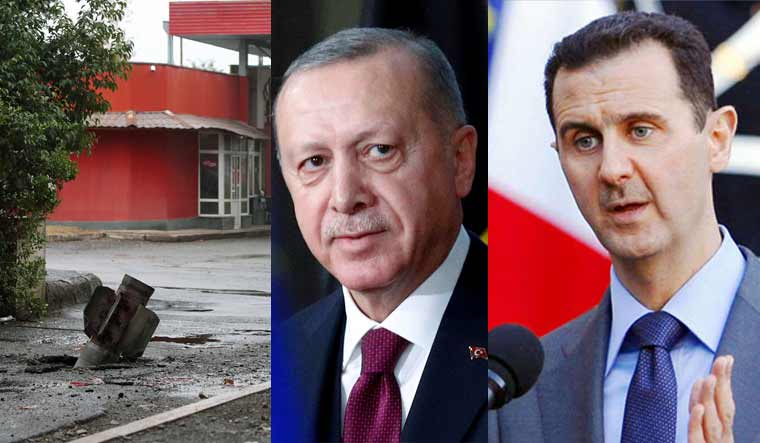 Collage: The remains of a rocket shell can be seen near the capital of Nagorno-Karabakh Stepanakert; Turkish President Recep Erdogan, Syrian President Bashar al-Assad | Reuters

Syrian President Bashar al-Assad on Tuesday jumped into the geopolitical fray between Armenia and Azerbaijan over the disputed Nagorno-Karabakh region, blaming Turkey—which borders both countries and favours Azerbaijan—for the outbreak of hostilities that have left dozens dead on either side.

Speaking to Russian news agency RIA, Assad said Turkish President Recep Erdogan was the “main instigator” and “initiator” of the conflict. In addition, he backed the accusation by French President Emmanuel Macron that Turkey had sent Syrian jihadists to fight, saying “Damascus can confirm this”.

The move comes as Turkey calls on the world to support Azerbaijan, its traditional ally in the region. Turkish Foreign Minister Mevlut Cavusoglu visited Baku on Tuesday in a show of solidarity and criticised calls for a truce.

While Turkey shares only a small border with Azerbaijan, via its exclave of Nakhchivan, it has supported Baku against Armenia in previous conflicts. In turn, Armenia usually enjoys the support of Russia (who have so far remained silent on the conflict).

The current found of fighting is taking place in the self-proclaimed Artsakh Republic, or Nagorno-Karabakh, a mountainous region located within what Azerbaijan claims is its territory and which is connected to Armenia via a series of territories controlled by NKR fighters.

Cavusoglu asked whether Armenia would withdraw from Azerbaijan’s territory following a possible cease-fire, adding that the country had “enjoyed the fruits” of occupation for 30 years.

Armenia alleges that Turkey has been arming Azerbaijan in the current conflict. Armenia's frayed relations with Istanbul date back decades, having called for years for the international community to recognise the Ottoman Empire's genocide of up to 1.5 million Armenians between 1915-17.

Both Armenia and Azerbaijan have been shelling each others’ cities, with Baku bombing Nagorno-Karabakh capital Stepanakert while Armenia has been shelling Ganja. Martial law has been imposed in both countries since the fighting broke out on September 27.