China flooded Taiwan Strait with warplanes, in an unusually large display of force 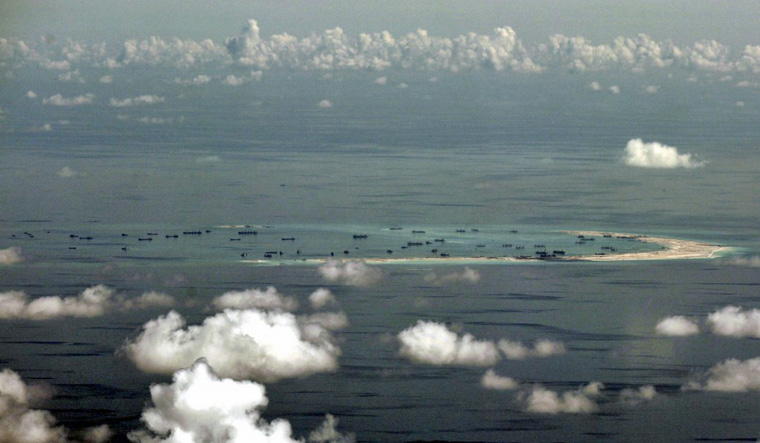 The dispute over South China Sea is one as old as time itself. At present, China, who claims almost all of the disputed waters, is stuck in territorial rivalries with Taiwan, Indonesia, the Philippines, Vietnam and Malaysia. The dispute has become particularly belligerent over the past few days, with China engaging in a military faceoff with both Taiwan and Indonesia, sending alarm bells ringing.

What is the nature of the dispute?

China claims sovereignty over the South China Sea, which is a significant maritime route as well as a region with vast untapped reserves of oil and natural gas. Various zones in the region like Spratly Islands and Paracel Islands are at the heart of the dispute.

China goes by its 'nine-dash-line' claims, which has its origins in the era of the Nationalist Kuomintang government before they were ousted by the communist forces and withdrew to Taiwan. The nine-dash line was initially an 'eleven-dash-line' before Chairman Mao Zedong ceded the Gulf of Tonkin to communists in North Vietnam in a show of friendship. The claims, China says, are "historical", which are contested by other Southeast Asian nations who assert Exclusive Economic Zones (EEZ) under their sovereignty, citing current geography. A 2016 international arbitration ruling involving the Philippines invalidated most of China's sweeping claims in the sea, but China has ignored the ruling.

According to a CFR study, satellite surveillance in the recent years have shown China’s increased efforts to reclaim land by physically increasing the size of islands or creating new islands altogether; by piling sand onto existing reefs, China has constructed ports, military installations, and airstrips, militarising zones across the region.

China flooded the Taiwan Strait at the northern end of the South China Sea with warplanes over two days last week, drawing a response from the self-governing island democracy that China claims as its own territory. The drills were timed to coincide with the visit to Taiwan by a high-ranking US envoy for talks and to attend a memorial service for former Taiwanese president Lee Teng-hui, who led the island's transition to full democracy in the face of Chinese threats.

The presence of Keith Krach, the US undersecretary for state, drew a strong rebuke from China, which sent 18 warplanes across the midline of the Taiwan Strait in an unusually large display of force. On Saturday, Beijing again dispatched 19 more warplanes, two of which were bombers, according to Taiwan's defense ministry. The island's air force scrambled their own and deployed an air defense missile system to monitor China's activities, according to a statement.

Taiwan ordered the Chinese planes to leave, saying they would "bear all the consequences" if they did not.

An Indonesian patrol ship confronted a Chinese coast guard vessel that spent almost three days in waters where Indonesia claims economic rights and are near the southernmost part of China's disputed South China Sea claims. "We asked them to move out as it was Indonesia's EEZ. But they insisted that it is China's nine-dash-line territory. Our officers at the vessel argued with them until they moved out," said Aan Kurnia, chief of the Indonesian Maritime Security Agency. The Chinese coast guard vessel finally left the North Natuna Sea on Monday at 11:20am, he said.

According to a study by the Foreign Policy Research Institute (FPRI), The waters north of the Natuna Islands are also critical to the future of Indonesia’s energy industry. The country’s biggest untapped natural gas field, called East Natuna and contains some 46 trillion cubic feet of recoverable gas resources, is located there. "Today, China’s burgeoning maritime forces and newly built military facilities in the Spratly archipelago have greatly expanded its reach in the South China Sea. As a result, China seems to have resumed its southward push through the South China Sea. Using 'salami tactics'—actions designed to incrementally overcome opposition—China has already put the Philippines on its heels and seems on its way to doing the same to Malaysia and, perhaps, even Vietnam," according to Felix K. Chang, the author of the study.